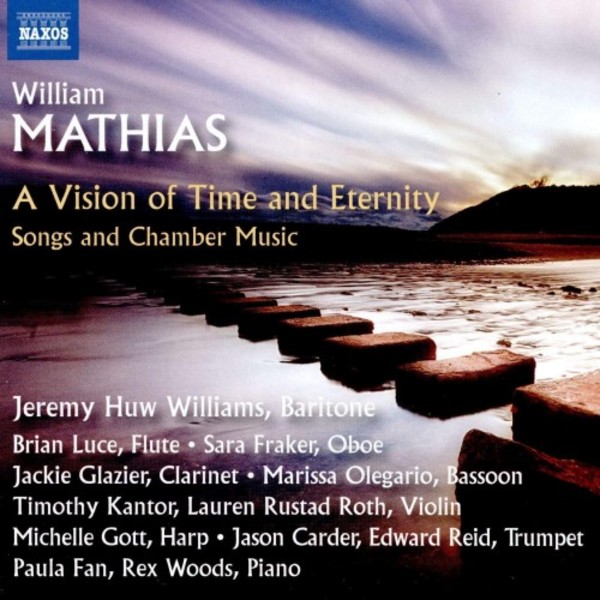 Mathias - A Vision of Time and Eternity: Songs and Chamber Music

William Mathias was one of the most significant and prolific Welsh composers of the 20th century. His flexible and highly approachable style can be heard in the holiday mood of the Suite Parisienne, the brilliance and lyricism of the Capriccio for flute and piano and the wonderfully rhapsodic Sonata for Harp. Mathiass songs are among the most communicative settings of their kind, including Pan Oeddwn Fachgen (A Dream of Youth), considered by the composer to be one of the finest lyrical poems in modern Welsh.

This release celebrates the 85th anniversary of William Mathiass birth in 2019 with premiere recordings of significant works such as A Vision of Time and Eternity alongside smaller-scale pieces and affectionate arrangements of Welsh folk songs. Mathias is best known for his larger-scale choral and orchestral works, but in the past we have tended to explore less frequently performed repertoire from his extensive catalogue, including a most welcome (ClassicsToday.com) collection of choral works (8573523), and his Violin Sonatas (8572292), found to be music that is approachable and satisfying by MusicWeb International.

Key performer in this recording, baritone Jeremy Huw Williams, has an intimate knowledge of Mathiass music, having given modern premieres of his songs from the 1950s and early 1960s when they were discovered in manuscript after the composers untimely death at the age of 57. He has appeared on our recordings of songs by Alun Hoddinott (8571360) and William Alwyn (8570340), in which performances throughout reflect great credit on all concerned in their scrupulous preparation and unquenchable conviction (Gramophone).