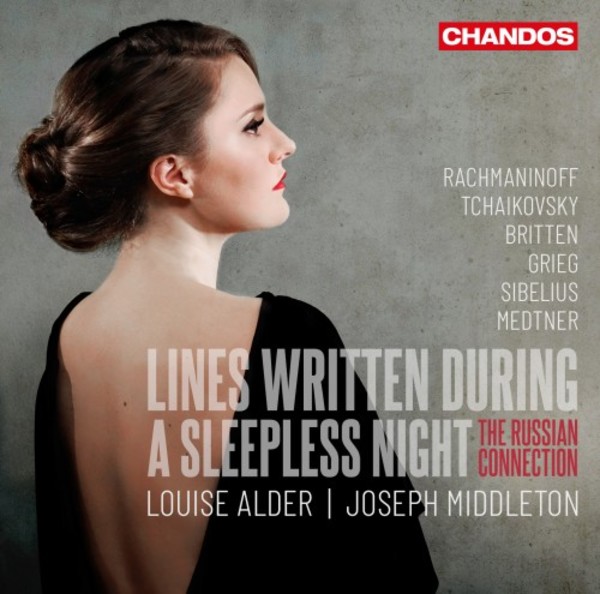 Lines Written during a Sleepless Night: The Russian Connection

The soprano Louise Alder has been described as the brightest lyric soprano of the younger generation (The Arts Desk), a born actress (Opera), and as having a voice of sparkling beauty (Gramophone). In this her debut recording for Chandos, she and her pianist, Joseph Middleton, have devised an unusual but rewarding programme that explores the works of six contrasting composers. As she writes in her booklet note: When Joseph suggested making a CD of Russian songs, including Russian composers who set poems in other languages, I jumped at the challenge. The more we discussed the repertoire, the more amazed I was to see how well it fitted with my own family history. In 1916 (the same year that Rachmaninov composed the Opus 38 songs), huge political unrest forced my great-grandparents and family to flee, shutting up the house in Odessa, travelling 1,687 km north by rail to St Petersburg, and then by sleigh into Finland, through Norway, and back to Britain. It is my pleasure to be able to honour my familys Russian connection with this meandering sleigh ride through Russia, with songs in Russian, French, and German, into Finland, in Swedish, and Norway, in German, back to the UK for a cycle of Britten songs in Russian.

2020 gets off to a cracking start for lovers of song with a new album from soprano Louise Alder, making her debut on the Chandos label, expertly accompanied by pianist Joseph Middleton. The pair impressed us back in 2017 with their disc of Richard Strauss lieder, Through Life and Love, for Orchid Classics, and this latest album has the same heady mixture of radiance, passion and musical intelligence that featured there. The connecting thread is part of Louise Alders family history: in 1916 her great-grandparents were forced by political unrest to emigrate from their home in Odessa, via St Petersburg, Finland and Norway, eventually reaching Britain. Alder and Middleton trace this journey through music and texts, and it makes for a uniquely compelling programme.

We start in Russia with Rachmaninovs glorious Six Songs, op.38 (1916), singer and pianist working together in perfect harmony in music that is as demanding for the accompanist as it is for the soloist. Right from the outset, the multi-lingual Alder and the ever-attentive Middleton put their stamp on this set, immediately inhabiting the expressive world of each song, from the chromatic melancholy of At night in my Garden, through the gentle spikiness of The rat catcher to the wistful reverie of Dream. Theres a slavic full-bloodedness to the singing here, but tempered by Alders fabulously focused tone, and it makes for a particularly engaging account of the set.

From Russia we move to Finland and Sibelius, with four songs written around the turn of the century at a time when he was working on his First and Second Symphonies. The juxtaposition with Rachmaninov points up fascinating parallels in their respective late-Romantic soundworlds. Pick of the bunch here are the magically-textured Säv, säv, susa (op.36 no.4) and the magnificent Flickan kom ifrån sin älsklings möte (op.37 no.5, aka The Tryst), but all receive magnificent, expressively immersive performances.

Griegs Six Songs, op.48 (1894-98), all to German texts, take us further back chronologically, the gentle folk-like world of the opening songs giving way to greater introspection in the closing three, and Alder is once again excellent at highlighting the changes of mood while preserving the sets overall integrity. From Grieg in German to Tchaikovsky in French - the Six Mélodies, op.65 (1888) - and again parallels are obvious, both in the overarching lyrical feel, and in the expressive range, from gentle good-humour to exquisitely poised inwardness. Alder and Middlteon work together beautifully in capturing the delicacy of tone and radiance of textures.

Next up are two songs by the Russian emigré of German ancestry, Nikolai Medtner, who, like Louise Alders forebears, ended up settling in Britain. The two Goethe settings included here, Mailied and Meeresstille, date from around 1905, and the latter is surprising for its harmonic radicality from a composer with such a conservative reputation: Alder does it full justice in a performance of rapt intensity and superb dynamic control.

And so, by a rather circuitous route, we arrive in Britain, with Benjamin Brittens remarkable song-cycle The Poets Echo, op.76 (1965). This haunting set of six Pushkin settings was the result of Brittens close friendship with cellist Mstislav Rostropovich and his wife, the soprano Galina Vishnevskaya, and bears the inscription For Galya and Slava. It was a brave move of Britten, who was not a Russian speaker, to set texts by the Russian Shakespeare in the original language, but it pays off wonderfully in a set that, more than any of the others here, has the feeling of a true song-cycle. And, thanks to Alder and Middleton it receives the modern recording it deserves, idiomatic in its word-pointing, emotionally raw in intensity, musically intelligent and all the while hugely committed. Fans of Alder, one of the most impressive sopranos to emerge in recent years, will already have some idea of what to expect. For those who havent already heard her solo recital work, this deeply personal disc is a marvellous place to start, showing her versatility, her extraordinary tonal prowess and her gift for compelling programming to excellent advantage.

Heres a really lovely disc from two of classical songs brightest artists. The soprano Louise Alder and pianist Joseph Middleton start with Rachmaninov and end with Britten, taking in Sibelius, Grieg, Tchaikovsky and Medtner on the way ... Alder is in glorious voice, her soprano fresh and untethered; the assurance of youth and the doubt born of experience come across equally convincingly. Her high notes gleam, and her words are direct and communicative, whether in Russian, Swedish, German or French. ... There will be discoveries here for all but the most dedicated song aficionados ... a disc you will want to play again right away.  Erica Jeal
The Guardian 23 January 2020

Louise Alders recording presence moves into a considerably higher gear with this release  not her first recital disc but one distinctively curated to further tap into her intelligence, remarkable linguistic range and emotionally vibrant instincts... David Patrick Stearns
Gramophone March 2020