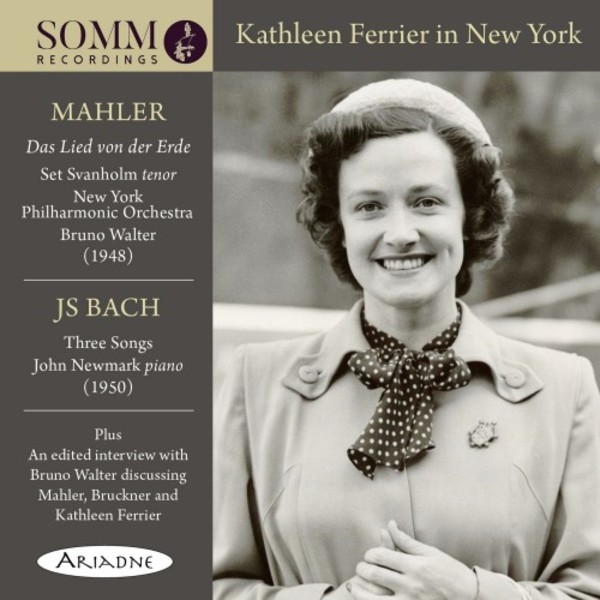 SOMM Recordings announces the release of Kathleen Ferrier in New York, historic performances of Mahler and Bach by the much-loved contralto during her triumphant visits to the United States in 1948 and 1950.

Recorded live on Ferriers only appearances in Carnegie Hall in January 1948, four months after her acclaimed performance at the inaugural Edinburgh International Festival, Mahlers Das Lied von der Erde reunited her with the conductor Bruno Walter and saw her making first appearances with tenor Set Svanholm and the New York Philharmonic Orchestra.

Re-mastered by Norman White and Adrian Tuddenham, this remarkable account pre-dates Ferriers often-reissued 1952 recording by four years and finds her in exhilarating fresh voice  a vivid, vital display of a great artist at her peak.

Also included are excerpts from a revealing 80th-birthday interview with Bruno Walter in which he discusses his friendship and collaborations with Mahler and recalls his first meeting and subsequent association with Kathleen Ferrier.

SOMMs previous Ferrier releases include Bachs Mass in B minor (Ariadne 5000-2), songs by Brahms, Chausson and Mahler (SOMMCD 075) and Kathleen Ferrier Remembered, a first release of BBC Radio recordings of Lieder and British songs (SOMMCD 264). Kathleen Ferrier in Celebration of Bach (Ariadne 5004) was acclaimed by Gramophone as an important addition to Ferriers discography one of the most beautiful things she ever committed to disc.

... let me say straight away that, while Ferrier was by her own account fighting a cold at the time, this performance [of Das Lied von der Erde] for me gives a far clearer sense of why Walter felt he had found the ideal singer for the piece than his later Vienna recording. ... Ferriers shadings in Der Einsame im Herbst bring with them a new depth of expression. ... The orchestral detail is remarkable given the source of 78rpm acetate transcription discs  and the remastering has preserved a surprising degree of transparency in what one might call the exotic embroidery of the scoring.  Edward Seckerson
Gramophone February 2020