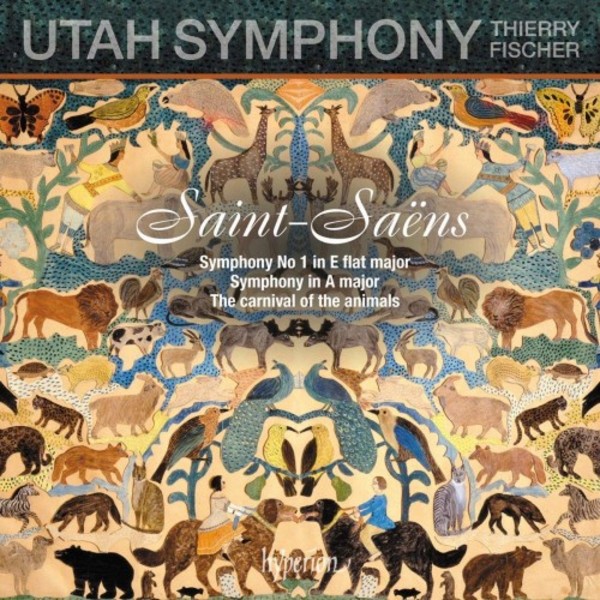 Saint-Saens - Symphony no.1, Symphony in A major, Carnival of the Animals

Carnival of the Animals
Symphony in A major
Symphony no.1 in E flat major, op.2

Carnival of the Animals
Symphony in A major
Symphony no.1 in E flat major, op.2

Dont be fooled by those well-known portraits of Saint-Saëns the bearded éminence grise  the two symphonies recorded here are the work of the young Camille, spreading his compositional wings and displaying a technical fluency far beyond his teenage years. In between, a certain musical menagerie roars, clucks, brays and squawks for attention ...

Apart from the ever-popular Third, recordings of Saint-Saënss symphonies are still rare enough that any new cycle can be anticipated with eagerness. There have been few comprehensive surveys since Jean Martinons for HMV in the mid-1970s, so Thierry Fischers recently completed traversal with the Utah Symphony on Hyperion is especially welcome. The virtues of this series have already been apparent in the releases of the Second and Third Symphonies plus the early Urbs Roma Symphony in F: quality orchestral playing, excellently recorded, with a keen sense of pacing, balance and textural detail. Each release has also had the added attraction of such fillers as the Bacchanale from Samson et Dalila, Danse macabre and three tableaux from the rarely heard La Foi.

The final release in the cycle has similar strengths. It combines the early Symphony in A major, written around 1850 when Saint-Saëns was just 15, with the Symphony no.1 in E flat, op.2, of just three years later. If neither work has quite the individual stamp of the composers later music, they are still by any but the most exceptional standards remarkable works for a musician still in his teens, showing a fine feeling for orchestral colour and a gift for unpretentious but engaging melodies that remained with Saint-Saëns throughout his life. The A major Symphony shows the unmistakable influences of Schubert and Mozart (the famous four-note tag from the finale of the latters Jupiter Symphony features prominently in the first movements Allegro vivace), and above all Mendelssohn, whose spirit hovers over the Larghetto slow movement as well as the lively Finale, which requires fantastically nimble work from the strings and woodwind that the Utah players positively relish. The classically-hued Scherzo (just flute, oboe and strings) is a similarly happy creation, with hints of early Beethoven in its good-humoured twists and turns.

By the time of the Symphony No.1, Saint-Saëns was already beginning to find his own voice, and the sureness with which the Adagio slow introduction opens and then develops into an Allegro with martial tinges, coupled with the enlarged orchestral forces, reveal an easy confidence in the emerging French Romantic idiom. There are echoes of Gounod and even Berlioz, and Fischer is excellent at highlighting, without exaggeration, such imaginative touches as the divided timpani, placed antiphonally to excellent effect. The Marche-Scherzo of the second movement has an unexpected and delightful rustic feel. There are shades of Berliozs Harold en Italie here, as well as a Mendelssohnian lightness to the upper wind, who play consistently well throughout the disc.

The Adagio third movement is a gorgeous piece, with tremolo strings plus harps creating some magical textures, and a sustained lyricism in a gently lilting 9/8 metre that is completely captivating, especially when played as delicately as it is here. The Finale returns to the martial rhythms and tone of the first movement, but with further expanded brass and percussion, thrillingly set up by quietly anticipatory opening bars. The momentum climaxes in a closing fugue that, as Roger Nichols points out in his excellent booklet notes, anticipates something of the thrill of the Third Symphony, still three decades away. Fischer and the Utah Symphony are at their most exciting here, while always preserving the excellent tone that places them comfortably among the top American orchestras of the present day.

For this final disc in the series, the generous filler is that perennial favourite, Le Carnaval des animaux of 1886. With so many rival accounts playing up the humorous aspects of the score, Fischer instead gives us a reading that emphasises the works fundamental musicality. None of the many jokes are forced, allowing the wit to emerge more gently. There is fabulous textural clarity to the Aquarium movement, and pianists Jason Hardink and Kimi Kawashima are among the performances many strengths, their straight playing in the Pianistes movement fitting in well with Fischers overall symphonic conception of the piece. Much more than usual, one notices the steady overall arc of the work, for example in the pairing of the slow movements featuring Tortoises and the Elephant. A bracingly lively collection of Fossils leads with well-judged inevitability to a beautifully understated account of Le Cygne featuring the excellent principal cello of Rainer Eudeikis, and Fischer and his musicians finally let their hair down in a Finale that is all the more effective for the foregoing restraint.

For those wanting a complete set of Saint-Saënss symphonies in excellent modern sound, with consistently musical performances from a top-notch band, this Utah cycle is now a most tempting proposition, and a notable addition to the current catalogue. Congratulations to all involved!