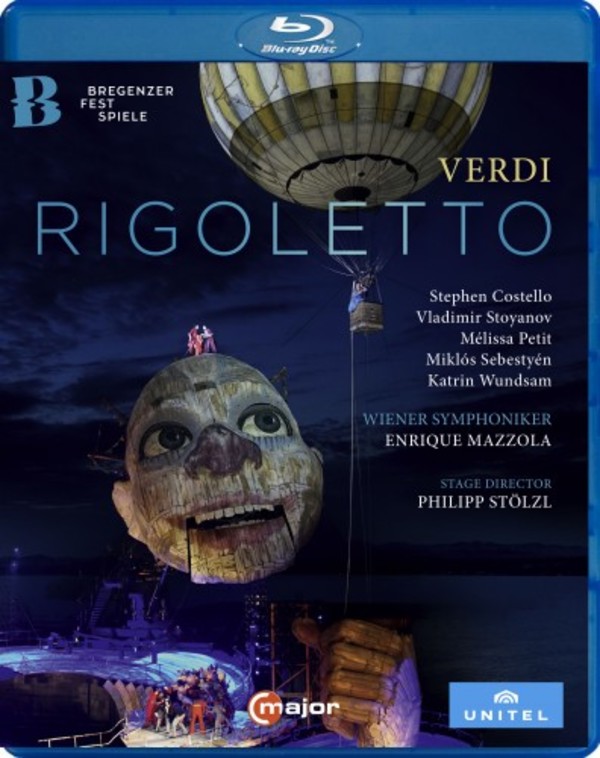 Giuseppe Verdis masterpiece Rigoletto  compelling, blood-curdling and beautiful  is being performed for the first time on the Bregenz lake stage. The stage director and designer Philipp Stölzl, known for his successful productions at Salzburg Festival as well as music videos for the German band Rammstein, highlights the striking contrasts between spectacle and intimate chamber drama in his production of Verdis opera.
Breathtaking, tight and thrilling arrangement, extremely beautiful. Philipp Stölzl delivers a superlative Rigoletto to Bregenz lake stage. - Frankfurter Rundschau Online
The performance of the three main characters has been outstanding. - Der Standard Online
Rigoletto becomes a Hollywood spectacle on Lake Constance. - Handelsblatt
Nothing but a sensation. - SWR 2
Bonus: The Making of Rigoletto

Its perhaps inevitable that in an open-air venue such as Bregenz  essentially arena opera with an audience of 7000  the emphasis has to be on a spectacular production. But it would be wrong to overshadow the singers here, who do an amazing job under such physically demanding conditions. Vladimir Stoyanov is excellent as Rigoletto, his oaky baritone not unlike the great Leo Nucci, who sang this role over 500 times. ... A most enjoyable production and performance, even if clowns do give you the heebie-jeebies.  Mark Pullinger
Gramophone March 2020