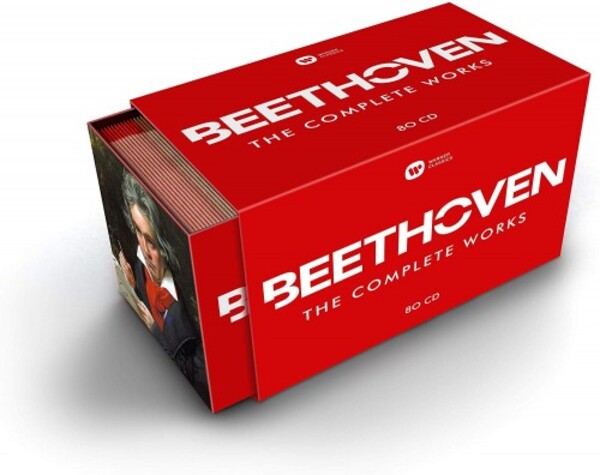 Doing full justice to Beethovens awe-inspiring, but profoundly humane genius, this is Warner Classics first-ever complete edition of his works. It draws discerningly on the riches of the labels catalogue, assuring integrity by assigning entire cycles to the same artist, ensemble  or team of performers. Classics from the age of the LP are complemented by the best of the CD era and by a wealth of new recordings of  rarely heard works that are ripe for discovery. This is a comprehensive and most satisfying tribute to Beethoven, a transformative force  who has enhanced the lives of music-lovers for more than two centuries.

This complete Beethoven edition follows the major success of Warner Classics complete Debussy and Berlioz editions, acknowledged as the best of their kind. The 80-CD set offers recordings of exceptional artistic and technical quality at a price that represents outstanding value for money.

Carefully selected from the Warner Classics and Erato catalogues, and complemented by items licensed in from external catalogues, the recordings do full justice to the extraordinary breadth, diversity and depth of Beethovens oeuvre. The edition includes classic recordings from the LP era, but the majority of the collection, above all the complete cycles (symphonies, piano concertos, piano sonatas, string quartets etc.), comprise recordings that represent the best of the CD era.

Beethoven (with Bach) is often judged the greatest of all composers. Not only does he stand as a revolutionary and influential figure in the development of music, he produced a large and diverse body of works which have thrilled audiences consistently over two centuries. Among his most widely loved masterpieces are his Symphonies nos. 3 (Eroica), 5, 6 (Pastoral), 7 and 9 (Choral, which concludes with the Ode to Joy); Piano Concerto no.5 (Emperor); Violin Concerto; piano sonatas such as the Moonlight, Pathétique and Hammerklavier; the Spring and Kreutzer Sonatas for violin and piano; the Razumovsky String Quartets; the opera Fidelio.

Beethoven, born in the German city of Bonn moved to Vienna  then the musical capital of Europe  at the age 22 and lived there for the rest of his life. He began making a successful career as a pianist-composer, but around 1800 he realised that he was going deaf. Despite this tragedy, and many other difficulties and complications in his life, his genius and determination produced a stream of great works that broke new musical ground and which, on a philosophical level, assert the dignity, potential and aspirations of humanity.

Beethoven adopted musical forms that had been developed by composers such as Haydn and Mozart  notably the symphony, the piano sonata, the piano concerto, the violin concerto and the string quartet  and took them into new structural, technical and expressive realms. He embodies the transition from the Classical to the Romantic era, exercised a decisive influence on his contemporaries and successors (e.g. Brahms, Wagner), and even presaged the 20th century in works such as the harmonically adventurous Grosse Fuge for string quartet and his Piano Sonata no.32, with its suggestions of boogie-woogie.

A particular feature of the box is continuity of the interpreter(s) throughout an entire cycle of works in the same musical genre/related genres:

Some 300 tracks specially recorded for the box: these specially recorded tracks mostly comprise rarely heard works that are waiting to be discovered by a broader body of listeners. In the main these are piano works, choral works and songs.

Booklet note by David Wyn Jones: David Wyn Jones is Professor of Music at Cardiff University in Wales, UK. He is an authority on music of the Classical Period, in particular Haydn, Beethoven and Vienna.

The CD covers carry evocative paintings by Caspar David Friedrich, Josef Anton Koch and other German and Austrian artists of Beethovens time. The booklet is richly illustrated and includes a timeline and the Index of all Beethovens works.

... having spent the past week in the company of the Warner Classics set, I have to admit it has been an unalloyed joy, because it allows you to get a sense of a composer in the round. ... After one has explored these riches, Beethoven seems both more human and more extraordinary.  Ivan Hewett
The Daily Telegraph 4 January 2020