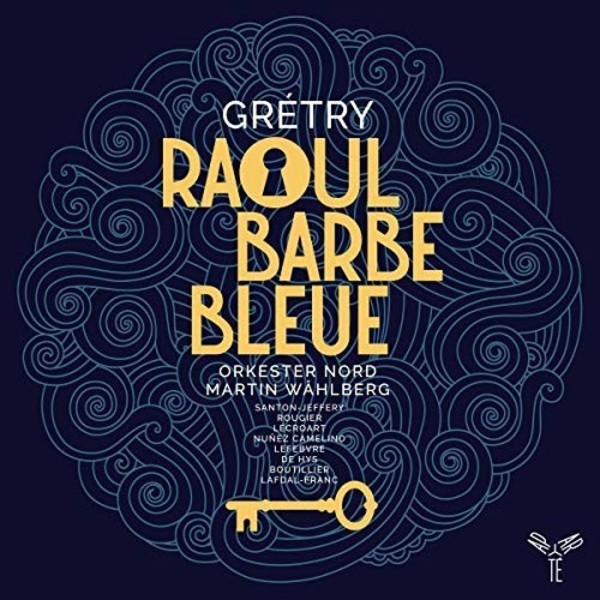 A collaboration of the Norwegian Music Festival Barokkfest and the Centre de musique baroque de Versailles. Premiered just a few months before the French Revolution and fallen into oblivion since, Raoul Barbe-bleue is an unclassifiable opéra comique whose musical and dramatic implications are so remarkable that it even inspired Offenbach.

Marvellous and medieval universes meet in this drama based on Perraults tale that announces, both through its writing and its inherent horror, the upcoming musical romanticism. Indeed, far from being an archetype of the genre, Raoul Barbe-bleue depicts a cruel gentry from a quite political point of view, that it even dares to mock by mingling tragical register and comic effects, from travesty to the figure of the scapegoat valet.

The mysterious atmosphere that emerges from the drama (and that recalls eventually Webers Singspiel) stems mostly from a musical writing that widely supports the suspense and that cannot be compared to the naïve and simple early works of the composer. Indeed, Grétrys musical refinement and elegance serve the dramatic strength of his work and evokes Mozarts Requiem introit.

Recorded in the beautiful theatre in Trondheim (Norway) with a brilliant cast under Martin Wahlbergs direction, Raoul Barbe-bleue reveals a considerable richness that will certainly strike both the neophyte and the specialist.

The splendidly named André-Ernest-Modeste Grétry is best known to opera buffs as a leading figure in the development of the French opéra comique. Born in 1741 in Liège of Walloon heritage, he studied in Rome before settling in Paris. A political pragmatist, he successfully straddled the dying years of the ancien régime, the revolutionary period, and the dawning of the Napoleonic era. He combined a gift for memorable melodies with sensitive setting of the French language while, crucially, expanding the expressive range of a genre defined by the use of spoken dialogue rather than recitative, and integrating the musical forms to more closely reflect the stage action, which gradually lost its roots in vaudeville and parody to tackle more ambitious, serious, pathos-tinged subjects. Today he is best remembered for Zémire et Azor (1771, a version of the Beauty and the Beast story), and his masterpiece, Richard Coeur-de-Lion (1784). But, as revivals of his other opéras comiques have gathered pace, a more nuanced view of his achievements has emerged. This marvellous new recording of Raoul Barbe-Bleue (1789) from Martin Wåhlberg and the Trondheim-based Orkester Nord with a fine Francophone cast, made in conjunction with a stage production at the Trondheim Early Music Festival, is sure to take that rediscovery a stage further.

The opera is a double-parody, of Charles Perraults celebrated (and operatically fertile) Bluebeard tale, and also of the legend of the medieval Lady of Fayel. In Grétrys version (to an assured libretto by Michel-Jean Sedaine, a master of the genre), the heroine Isaure loves the handsome young knight Vergy, but both their families are impoverished. Isaures brothers instead favour a match with the wealthy but fearsome (and much reviled) Raoul de Carmantans. Isaure only agrees to marry Raoul when Vergy selflessly makes way for the better match. Things take an alarming turn when Raoul, before venturing forth from his castle, gives Isaure the keys of his castle but instructs her never to open the door of one particular chamber. When she does, she discovers to her audible horror the corpses (and nearby heads) of his three former wives and, on his return, prepares to face his deadly wrath. However, Vergy has entered the castle as Isaures late elder sister, Anne, whom he conveniently resembles. Together with Raouls servant Osman, they manage to send a message beyond the castle walls, and soon the fathers of Raouls previous brides ride to the rescue, with one of them engaging the tyrant in combat and killing him at the entrance of the forbidden chamber. Isaure is now free to marry Vergy, with the blessing of her brothers, and all rejoice at the demise of such a cruel monster.

Grétrys great achievement here is to build dramatic tension while reconciling the serious and farcical aspects of the story, as well as integrating the musical forms to match the unfolding drama. The most celebrated example of this is the Act 3 turret scene, where Vergy-Anne is at a window in the castles tower, while Isaure pretends to be at prayer and Raoul orders his wife to follow him down to the vault: three singers, separated spatially, communicating with one another while the emotional temperature steadily rises. There are en passant several moments of more traditional comedy but also, thanks to the belligerent, vengeful character of Raoul, plenty of excuses for martial pomp (Grétry does a nice line in marches), and a climactic instrumental symphonie as Raoul is defeated in combat.

Wåhlberg and his excellent cast and orchestra do Grétry handsome justice. Soprano Chantal Santon-Jeffrey excels as a radiant Isaure with a wide emotional range but beautifully focused tone, tenor François Rougier is an impassioned Vergy with a nice comedic side when in disguise as the elderly Anne, and baritone Matthieu Lécroart makes a most formidable and imposing Raoul, really grabbing the listeners attention on every appearance. All the lesser roles are taken with distinction, with Jérôme Boutillier indulging in some magnificently over-the-top comic dialogue as Isaures older brother the Marquis de Carabas. With the Orkester Nord on original instruments playing as if their lives depended on it, Wåhlberg goes for some bracing speeds that further enhance the operas sure sense of dramatic pacing.

In the end, for all the manifest talents of the principals, this is very much an ensemble achievement, and it should help put Grétry back firmly on the operatic map. Indeed, if his more celebrated works were treated to such committed and stylish performance (beautifully captured by the Aparte team), they would certainly win wider audiences. As usual with Aparte, the recording is handsomely presented in a hardback-book style case, with synopsis, full libretto and translation, and an excellent accompanying commentary by David Le Marrec. For lovers of French and classical-era opera, this is a real treat and a hugely important addition to the catalogue.

... the scores atmosphere, sense of drama and numerous imaginative musical touches give this recording, made following live performances, the status of an eminently worthwhile revival. ... Matthieu Lécroart delivers a strong and apparently gentlemanly Raoul. One can imagine a production being brilliantly funny...  George Hall
BBC Music Magazine March 2020

With a well-chosen, largely Francophone cast and trim playing from the Norwegian period band there is plenty of tension in the more dramatic numbers. Martin Wåhlberg has a sure feeling for pacing and makes the most of the scores instrumental colours... Both in song and spoken dialogue all the singers sound at ease in opéra comique. Chantal Santon-Jeffery is a radiant Isaure, shaping her music gracefully while mustering ample dramatic intensity in extremis. As Vergy, François Rougier fields an attractive high, light tenor and acts well with the voice. Matthieu Lécroart, a sonorous if slightly rough-toned bass, blusters formidably as Raoul...  Richard Wigmore
Gramophone February 2020