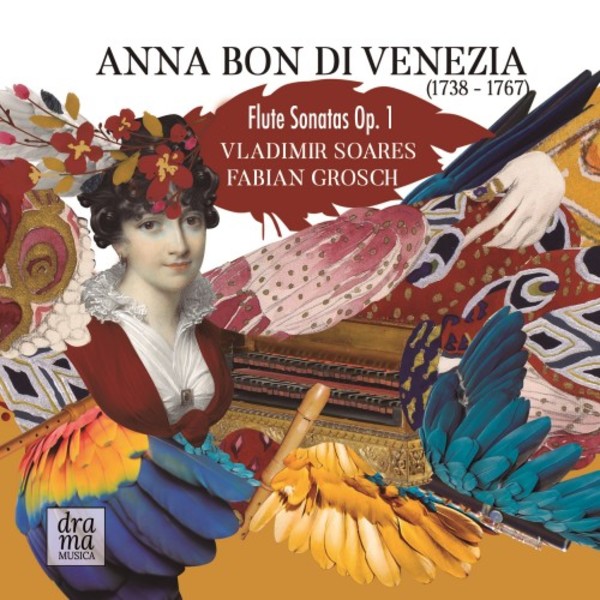 During the eighteenth century, music flourished in Italy and the impact of Italian musicians at courts all over Europe and further afield was a testament to their remarkable prowess as performers and composers. Italy was enjoying a period of economic and political stability, which meant that all forms of music including vocal (both sacred and secular) and instrumental were being championed. Many outstanding women scientists, scholars, artists, musicians and composers were found in Italy in the eighteenth century. One such female composer was Anna Bon from Venice.

The sixteen-year-old composer held the position of chamber music virtuoso in the court of King Frederick the Great of Prussia and dedicated this first set of compositions - Six Chamber Sonatas for flute and continuo, op.1 (1756), to the flute-playing King.

As a set of compositions they deserve to be better known and one hopes they will make it into more mainstream programmes as their simple yet charming message is communicated through this current recording presented by recorder player Vladimir Soares and harpsichordist Fabian Grosch.

Brazilian recorder player Vladimir Soares began his musical studies in the Orquestra Villa-Lobos - a social project that provides free musical education to children and teenagers in the South of Brazil. He graduated at the Arts Institute in Porto Alegre (Brazil) before continuing his studies at the Musikhochschule Stuttgart. In Stuttgart, Vladimir completed a Masters in Chamber Music in 2015 and a Masters in Recorder in 2016 under the guidance of Professor Hans-Joachim Fuss and Andrea Buchert. Vladimir received distinction in both diplomas, as well as the Láurea Prize, which has not been given to a recorder player since 1991. Vladimir has distinguished himself as performer and has performed as a soloist in front of major orchestras in Brazil as well as the Stuttgarter Kammerorchester in Germany. Since 2001, he works as a music educator, teaching flute lessons in music schools, regular schools, extension projects, NGOs and cultural institutions in Brazil and Germany. His collaborations include several performances of the whole collections of Motets by J.S. Bach with conductor Johannes Zimmermann in Esslingen, Germany.

Harpsichordist, organist and recorder player, Fabian Grosch dedicates his music studies to the early music research and performances of period instruments. He started his harpsichord studies with Petra Marianowski and since then has been working with historical keyboard instruments in chamber music recitals at the Hochschule für Musik und Darstellende Kunst, Stuttgart and as a continuo player His collaborations include several performances of the whole collections of Motets by J.S. Bach with conductor Johannes Zimmermann in Esslingen, Germany.