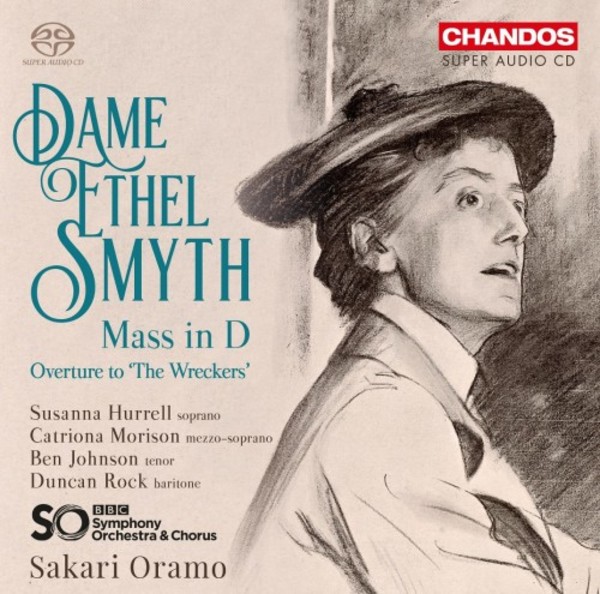 Ethel Smyth was one of Englands foremost Victorian composers, and a prominent suffragette. She was the first female composer to be honoured with a Damehood. She studied composition with Carl Reinecke in Leipzig (alongside Dvořák, Grieg and Tchaikovsky) and then privately with Heinrich von Herzogenberg (who introduced her to Brahms and Clara Schumann). Her Mass in D is her only large-scale religious work, although it was certainly composed for the concert hall rather than the church. Scored for 4 soloists, choir, and orchestra, the Mass in D sets the usual six parts of the mass, but is performed with the Gloria at the end, not second, at the instruction of the composer. Her opera The Wreckers, set in mid-eighteenth-century Cornwall, is considered by some critics to be the most important English opera composed during the period between Purcell and Britten. The Overture sets the scene wonderfully, as well as introducing the main thematic material to follow. Sakari Oramo and his BBC forces are joined by an outstanding quartet of soloists for this Surround Sound recording.

Still massively underrepresented on disc, Ethel Smyths position as a pioneer among British women composers has received significant support over the years from the Chandos label. Although Smyth became the first female composer to be honoured with a Damehood for her services to music, her reputation during her lifetime (1858-1944) was undermined by constant comparison (explicit or implied) with her male colleagues, while in the years since her death her resolutely late-Romantic compositions  including such groundbreaking operas as Der Wald, The Wreckers and The Boatswains Mate  fell out of step with the tastes of the times. So its good to welcome, from Chandos once again, new recordings of her Mass in D major (1891, revised 1925) and the Overture to The Wreckers (1902-04), in excellent, committed performances from the BBC Symphony Chorus and Orchestra under the BBCSOs chief conductor Sakari Oramo.

Oramo is well-known for his championing of little-known works, and while neither of these pieces is new to disc, he and his forces do them proud. Proceedings open with a tremendously spirited account The Wreckers overture, its vigorous main theme complemented by a striking transitional idea in bold octaves, and a dreamy, broadly lyrical second subject. Smyth had clearly absorbed the spirit of her times, not least the influence of Wagner (whose Meistersinger gets a nod in the broad, chorale-like episode, complete with organ, that precedes the final appearance of the main theme). The earthy, dance-like coda comes closest to suggesting, in grand tones, the operas Cornwall setting. Oramo and the BBCSO have a high old time with the piece, and it serves as an excellent curtain-raiser to the disc.

In its original form, the Mass in D is a full decade earlier than The Wreckers, and here the most tangible influence is that of Brahms, particularly in the imitative and declamatory passages of choral writing, which often recall the German Requiem. Smyth designed the work for concert rather than liturgical performance, with large forces including percussion, and recommended that the Gloria section be placed last, after the Agnus Dei, for best effect  an ordering that Oramo follows here. Despite its essentially conservative musical language, there are some really striking ideas here, belying Smyths reputation as a composer of tub-thumping, vigorous, masculine music. At the end of the central Christe section of the opening Kyrie movement theres a daringly chromatic suspension which resolves downwards, whose placement and length may well have the hairs standing on the back of your neck. In the ambitiously structured Credo movement there are some gorgeous instrumental solos (violin, flute and oboe) as the tenor solos Qui propter nos homines gives way to the sopranos exquisite et incarnatus est, momentarily calling to mind Beethovens Missa solemnis.

At the opening of the Sanctus, the alto soloist (Catriona Morison) is bathed in gentle brass chords, answered by an angelic female chorus, while the Benedictus with its radiant soprano solo (Susanna Hurrell) again reminds one of Brahmss German Requiem. In the Agnus Dei it is the tenor soloist (the warm-toned Ben Johnson, only slightly taxed in the higher range) who leads proceedings, before the full choir takes over for the central miserere nobis section, while the concluding dona nobis pacem is exquisitely beautiful. All four soloists (including baritone Duncan Rock) return in the concluding Gloria, another ambitiously scaled and constructed movement with plentiful contrasts of mood, and a rousing final Amen that is surely every bit as thrilling and uplifting as Smyth intended. From the most intimate passages to the most urgently demonstrative, all the forces are captured to perfection by the Chandos team in the venue of the Watford Colosseum, and there are excellent, detailed booklet notes by Laura Tunbridge. This fine disc should be heard by anyone interested in a more complete picture of British music at the turn of the last century, as well as being required listening for Smyth fans everywhere!