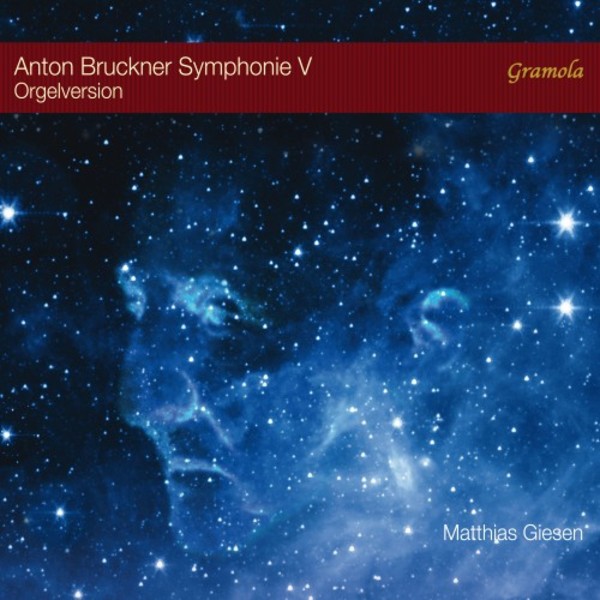 Bruckner - Symphony no.5 (transcr. for organ)

Symphony no.5 in B flat major (transcr. Matthias Giesen for organ)

Symphony no.5 in B flat major (transcr. Matthias Giesen for organ)

Anton Bruckners Fifth Symphony is one of the most moving and magnificent of his symphonic works. Matthias Giesen, who has been working for more than 20 years as the organist and stablemaster of the Monastery of St Florian, where Bruckner started his musical training as a choirboy, presents his transcription for organ of this monumental opus on this recording for Gramola. Matthias Giesen refined his rendition of Bruckner's Fifth on the Bruckner organ of St Florian, which can be heard on this recording, but also on numerous other organs for many years in order to do justice to the work both in terms of technical and musical matters. In 2017, Giesen presented his adaptation of the Fantastic, which Bruckner himself never heard in orchestral version during his lifetime, for the first time to an enthusiastic audience.

Matthias Giesen hails from Boppard on the Rhine near Koblenz. Between 1993 and 2001 he studied church music, music theory, organ, and ear training at the conservatories of Cologne and Stuttgart. After getting his church music career under way in Cologne, Giesen became the organist at St Florian  at the Bruckner organ  in 1999. In 2003 he became St Florian abbeys director of music, a position he held until 2017, directing the abbey choir, the Schola Floriana (St Florians a cappella group specialized in Gregorian church music which Giesen founded) and the Altomonte Orchestra.

After various teaching positions at the Conservatory in Cologne and at the Vienna University, he moved on to become a lecturer in music theory, analysis, and ear training at Viennas University of Music and Performing Arts. From 2016 he was also a lecturer for music theory, score- and basso continuo-playing, as well as musical form, at the Anton Bruckner Private University in Linz. In 2019 he was bestowed a professorship in music theory from said university.