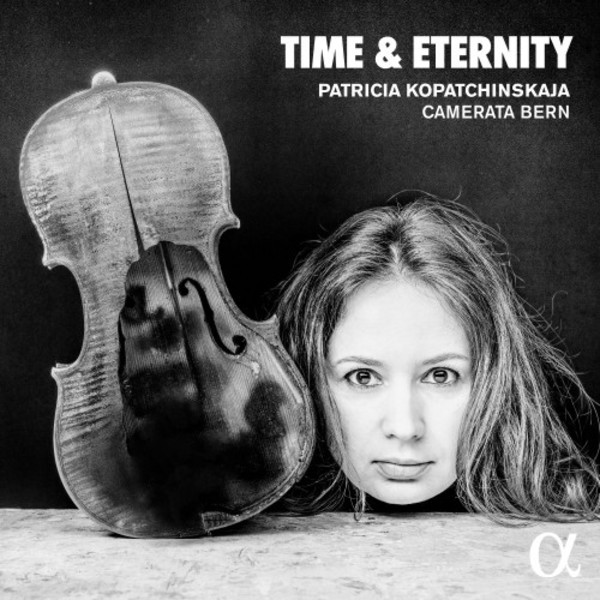 Crux for violin, timpani and bells

Crux for violin, timpani and bells

Time and Eternity. Always in search of powerful musical experiences, the violinist Patricia Kopatchinskaja and Camerata Bern  of which she has just taken over the artistic direction  here juxtapose Hartmanns Concerto funebre, composed in 1939 to express his indignation at the Nazis terror, and the Polyptyque for violin and orchestra that Frank Martin wrote in 1973 for Yehudi Menuhin, a work inspired by six scenes from the Passion of Christ painted by Duccio di Buoninsegna around 1310. The Kyrie from Machauts Messe de Nostre Dame, composed half a century after the altarpiece and heard here in an arrangement for strings, is interspersed between the movements, along with Bach chorales, as an invocation of eternal consolation. A Polish folksinger interprets the Jewish song Eliyahu hanavi, which expresses the hope of salvation and which Hartmann quotes in his concerto. Six hundred years of music to make the victims voices heard, says Patricia Kopatchinskaja. The album opens with Kol Nidrei by John Zorn (born 1953), in response to the eponymous prayer spoken by a representative of the Jewish community. A Catholic priest and an Orthodox priest also say a short prayer.

As with so many of her recent projects, on violinist Patricia Kopatchinskajas latest album, Time & Eternity, context is everything. At a basic level, it couples two minor masterpieces of the 20th-century violin concerto repertoire. Karl Amadeus Hartmanns Concerto funebre (1939, rev. 1959) and Frank Martins Polyptyque are both scored for solo violin and strings, ideal fare for Kopatchinskaja and the Camerata Bern, of which she recently became artistic director. Judging by the results on this disc, its a marriage made in heaven.

Hartmanns Concerto was written in response to the early years of Nazi terror in Germany, and to the Nazi occupation of Czechoslovakia and then Poland. Its introduction quotes the Czech Hussite hymn Ye who are Gods warriors (familiar to music-lovers from Smetanas Má vlast), while the final Chorale movement quotes the Russian song You fell victim that served as a memorial to the dead of the 1905 Bolshevik revolution (similarly familiar from Shostakovichs Eleventh Symphony). The finale also quotes the Jewish song Eliyahu hanavi, and it is from these various threads that Kopatchinskaja and her colleagues begin to weave the fabric of this enthralling album. The Hartmann Concerto, perhaps his best known work, receives one of its most thrilling and deeply-felt performances on disc, the Allegro di molto third movement delivered with particular venom. It is framed most effectively by Eliyahu hanavi and You fell victim, both sung by folk singers Beata, Sarah and Minika Würsten, with the latter song splintering into a terrifying group improvisation (an instrumental and vocal War Cadenza) that vividly suggest the horrors of war, including screams, gasps, and muttering voices.

Eliyahu hanavi is itself preceded by John Zorns five-minute piece for strings Kol Nidre, a work of deep introspection that owes much to the spiritual minimalism of Pärt and Górecki. Kol Nidre is the solemn declaration made on Yom Kippur, the Jewish Day of Atonement, and it is this text that is read at the outset of the album by a Jewish cantor from Bern. After You fell victim and the War Cadenza, a Polish priest from the Swiss capital delivers a prayer for forgiveness, and the first half of the album concludes with the folk-style Dwa serduszka (Two hearts), again featuring the Würsten sisters.

Just as the first half of the disc seems to grow organically and expressively out of the Hartmann Concerto, so the second half develops from the inspiration behind Martins work. Composed for Yehudi Menuhin, Polyptyque was inspired by a 14th-century Byzantine-style polyptych of the Passion story by Duccio di Buoninsegna. Each movement depicts a panel from the work, from Jesuss entry into Jerusalem, through the Last Supper, the Garden of Gethsemane and Jesuss trial, to the Glorification of the risen Christ. Only the scene of Crucifixion itself is omitted by Martin, and here Kopatchinskaja makes the marvellous insertion of Czech composer Lubo Fiers Crux for violin, timpani and bells, a work whose searing intensity and concentrated scoring make it ideal for this gripping performance. Interweaved between the movements of the Martin are string orchestra arrangements of a series of Bach chorales, most of them taken from the St John Passion, whose expressive and musical resonance more than make up for the missing sung voices, and whose pure Baroque tone splendidly complements Frank Martins emotionally febrile style. Before the final Bach chorale, a Russian orthodox priest recites the Easter troparion, Christ is risen from the dead, trampling down death by death, holding out the possibility of hope after suffering (part one of the disc) and death (part two).

And, just as the disc had opened with Kol Nidre, so the second half is launched by a string orchestra arrangement of the Kyrie from Guillaume de Machauts Messe de Nostre Dame, a work dating from the same century as Duccios polyptych. Here the string sound has the voice-like clarity of a viol consort (as well as a brief passage of pizzicato), and one of the discs many virtues is the sheer range of tone on offer, from crystalline purity, through opulent and often deliberately unsettling vibrato in passages of the Martin, to almost instrument-breaking incisiveness in Fiers Crux. As so often on the Alpha label, the artistry of the musicians is matched by superb recording and presentation, including colour reproduction of all the Duccio panels and a new painting by Camerata Berns second violinist Sibylla Leuenberger inspired by the music, its feeling of darkness, of the abyss. Listen to the disc and youll find it emotionally both immersive and draining, devised and executed with deep passion and commitment, and opening up new windows onto both the music itself and human experience. What more is there to say?

Concept programmes are meat and drink to the Moldovan-born violinists boundless musical curiosity. And shes not one to duck the big issues. ... The Hartmann in particular is an ideal vehicle for her interrogation and she exacts every ounce of expressive mileage. The Allegro moltos implacable drive scorches as she energises her Bern players (almost like Shostakovich on speed!)... Piquantly thought out, suavely executed and impeccably recorded, Kopatchinskajas latest project is a thought-provoking winner.  Paul Riley (Concerto Choice)
BBC Music Magazine November 2019

None of this jumbling-up affects PatKops extraordinary skills, her willingness to embrace emotional extremes or the flair of her Camerata companions. And it certainly doesnt touch the powerful, uninterrupted rendition of Karl Amadeus Hartmanns Concerto funèbre of 1939, a work haunted by war horrors existing and foreseen.  Geoff Brown
The Times 13 September 2019