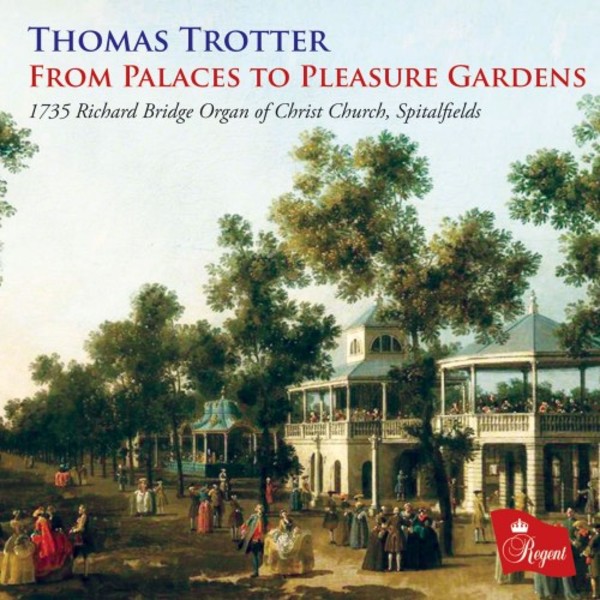 From Palaces to Pleasure Gardens

» no.6 in D major (arr. Thomas Trotter for solo organ)

» no.6 in D major (arr. Thomas Trotter for solo organ)

Georgian London was one of the wealthiest cities in the world and there was a significant appetite for concerts which attracted composers from all over Europe and beyond. Much of the musical patronage had royal connections and another significant centre of London concert life were the Pleasure Gardens where organ concertos were invariably a part of the concerts.

This programme contains a kaleidoscopic mix of the secular (concertos) and the sacred (organ voluntaries) from that period, including works by Handel, Corelli, JC Bach, and John Stanley.

Christ Church Spitalfields is an Anglican church built between 1714 and 1729 to a design by Nicholas Hawksmoor. It was one of the first churches built for the Commission for Building Fifty New Churches, to serve Londons new settlements.

The organ installed in the new church in 1735 is the masterpiece of one of Georgian Londons leading organ-makers, Richard Bridge (c16881758). It could claim to be the largest organ in England at the time of its construction, and retained that distinction until the nineteenth century.

Both the building and the organ underwent major changes over the years but a major restoration project restored the organ to the 1735 specification and it is regarded as an instrument of great historic significance.
Thomas Trotter is one of Britains most widely admired musicians and one of the worlds most respected organists. The excellence of his musicianship is reflected internationally in his musical partnerships. He performs as soloist with, amongst many others, the conductors Sir Simon Rattle, Bernard Haitink, Riccardo Chailly, and Sir Charles Mackerras. He has performed in Berlins Philharmonie, the Gewandhaus in Leipzig, the Concertgebouw in Amsterdam, the Musikverein and the Konzerthaus in Vienna, and Londons Royal Festival Hall.
...a sleight of hand that's as slick as a conjurer's....clarity rhythmic buoyancy, stylistic taste, imaginative colouring  and the ability to amaze. - Gramophone (REGDVD001)

...impressive: exciting and delivered with flair without ever being flashy. - International Record Review (REGDVD001)

...throughout this superbly engineered recording his mastery of tonal gradation, innate stylistic sense and imaginative colouring make for a recording as rewarding as it is timely. - Gramophone (REGCD256)