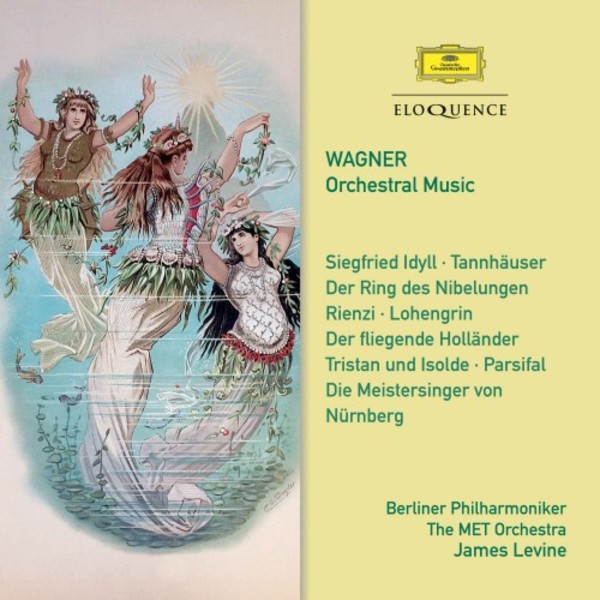 Epic interpretations of orchestral music from Wagners music dramas, conducted by James Levine. In 1991 and 1995 James Levine recorded two albums for Deutsche Grammophon of what have become known as bleeding chunks, in Ernest Newmans phrase, from Wagners operas.

Collected together for the first time on this Eloquence reissue, they form a comprehensive survey of overtures, preludes and excerpts, featuring many of Wagners bestknown melodies and most thrilling orchestral climaxes.

There are the noble trumpet tunes to open his early operatic successes, Rienzi and Tannhäuser, and the turbulent sea-scape to open Der fliegende Holländer. Both the serene first-act and jubilant third-act Preludes to Lohengrin are included, as well as highlights from the Ring and the preludes to the operas he composed while on a seven-year working holiday from the Ring, Die Meistersinger and Tristan und Isolde. The anthology concludes with some of the most quietly ecstatic music Wagner ever wrote, for the baptism of Kundry on the Good Friday Meadow in the third act of Parsifal.

Levine became music director of the Metropolitan Opera in New York aged just 27, having studied as a teenager with Walter Levin, Rudolf Serkin and at the Juilliard School. Under his leadership the MET Orchestra was trained and transformed into a superlative Wagner orchestra: full-bodied, silky and holding power in reserve for Levine to harness at the points of intense crisis and triumph without words in the music dramas. On this reissue, they are prefaced by the 1991 recording made by Levine in Berlin of Wagners birthday gift to his wife Cosima, the Siegfried Idyll which he based on themes from the Ring.

The DG sound is very forward, the impact of Walk re breathtaking after the warm vibrato of the strings in the Lohengrin Prelude. For the rest, the bird calls in Forest Murmurs are lovingly shaped ... a searing Liebestod from Tristan and, to conclude, the oboe is haunting and appropriately magical in the Good Friday Music from Parsifal. - BBC Music Magazine

As a further example of just how far the Met orchestra has come under Levines 20- year guidance, this showcase will serve very nicely ... Levine directs with characteristic energy, enjoyable gusto and [...] no mean flair. - Gramophone, October 1993

Wagners Siegfried Idyll is glowingly projected as a sanctified vision of humanity and domestic bliss. Levines performance has an unsullied piety which demands privacy in an almost religious sense. - Gramophone, August 1993