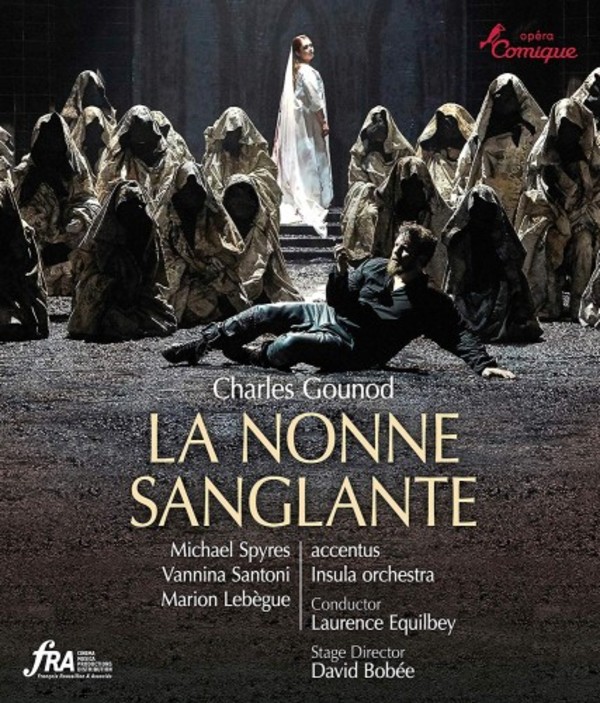 The plot of Gounods opera La Nonne sanglante (The Bleeding Nun) is drawn from Matthew Lewiss once famous 1796 novel The Monk. The subject is a Gothic melodrama featuring warring families, two lovers, and the vengeful spectre of the Nun, to which Gounod responds with music that fuses Romanticism with the supernatural on the grandest scale. This ground-breaking production features memorable set pieces enhanced by the stark drama of the stage setting and brilliant cinematic lighting effects.

Gounods work is unjustly forgotten after its premiere in 1854. In 2008 the opera was produced for the first time on a German stage, and in 2018 had a rare Paris revival at the Opéra Comique, in commemoration of the bicentenary of the composers birth, staged by David Bobée.

Opera News wrote about the performance: The production was directed by David Bobée and conducted by Laurence Equilbey, leading her Insula orchestra of period instruments with passion and precision. There was a Hammer Horror quality to Bobées direction of the cast; the crowd scenes were particularly successful, with the Accentus chorus and the dancers caught in a chaotic maelstrom of cinematic movement, which had a naturalism rarely seen on the opera stage.

In praise of the cast, Opera News added: Another reason for the rarity of revivals of this opera is the demands that the score places on the singers, particularly in the central role of Rodolphe. Tenor Michael Spyres conquered the wide range of the role with disconcerting ease, combining caressing lyricism with firm heroism when required. His perfect French diction and tireless commitment more than warranted his triumphant reception As the bleeding nun, mezzo Marion Lebègue had the right touch of the sepulcher in her voice while rising to defiant heights where necessary and acting with a ghostly air of glazed, eye-rolling intensity. As the ill-fated Agnès  a character in a constant state of distress  the attractive soprano Vannina Santoni provided some thrilling high notes on the edge of her vocal possibilities.