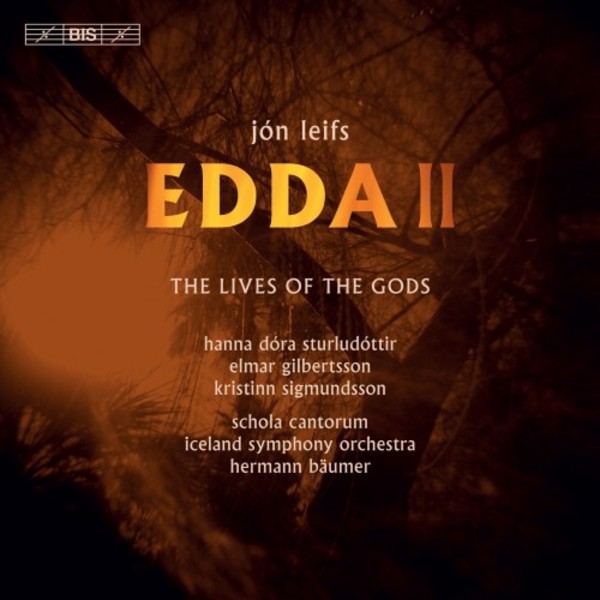 Leifs - Edda II: The Lives of the Gods

Edda, Part 2 'The Lives of the Gods' (Lif Gudanna)

Edda, Part 2 'The Lives of the Gods' (Lif Gudanna)

The music of Jón Leifs is often inspired by Icelands powerful nature and literary heritage. From early on he was profoundly influenced by the medieval tradition of Icelandic literature, preserved in a handful of manuscripts, including the Poetic Edda and the Prose Edda. Leifs magnum opus is the Edda oratorio, a massive (although incomplete) work in three large parts which occupied him on and off for most of his composing career  from around 1930 to his death in 1968. A partial performance of Edda I  The Creation of the World  met with incomprehension, and Leifs only resumed work on his great project a decade later, completing the second part  The Lives of the Gods  in 1966. He immediately started on the third part of the oratorio, and was still working on it at the time of his death. Neither of the two finished parts were performed in his lifetime, Edda I receiving its first complete performance in 2006 and Edda II in 2018, in conjunction with the recording of the present disc.

Leifs music is as ruggedly grandiose as its subject matter and the score calls for vocal soloists, choir and large orchestra, making huge demands on the performers. Once again the Iceland Symphony Orchestra and the intrepid Schola Cantorum join forces under the baton of conductor Hermann Bäumer, following up on their acclaimed recording of Edda I, which was described by reviewers as one of the recording events of the year (Gramophone) and splendid in its craggy and intensely individual lyricism and magnificence (MusicWeb-International.com).