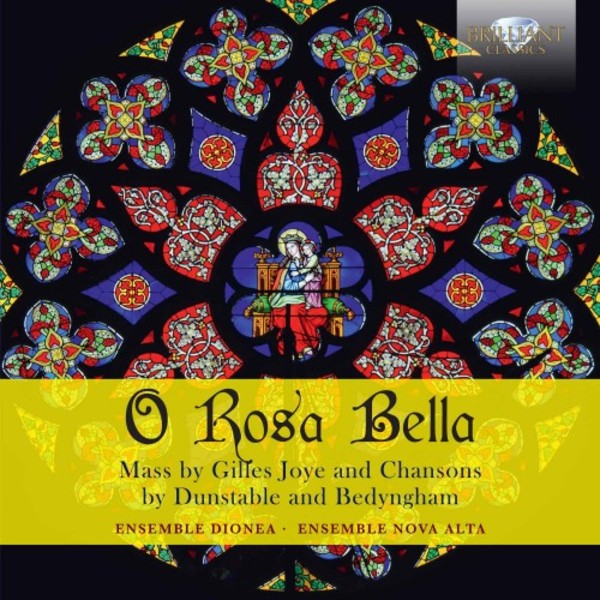 O Rosa bella is the title of two popular 15th-century chansons, the earlier composed by Johannes Ciconia and the latter originally attributed to John Dunstable, but now to John Bedyngham. The text is based on a poem written by Leonardo Giustiniani (1300-1446): 'O lovely rose, My sweet soul; Let me not die In courtly love.' More than 20 works were based on this popular theme by composers including Johannes Ockeghem, and a Mass attributed to Gilles Joye.

Born around 1420, in the Belgian town of Courtai, Joye worked as a singer and lived beyond his means. Having taken up a prestigious ecclesiastical post in Bruges, he was sent by the church fathers on a pilgrimage in order to atone for misdemeanous, but he continued to accumulate debts which compelled him to sell all his possessions; he died in penury. The song which Joye took as the basis for his Mass circulated widely during the 15th century; by a curious coincidence, Rosabella was also the name of Joyes lover with whom he lived openly (and imprudently).

The recording follows performance practice of the time by using only male voices doubled by instruments for the Mass and mixed voices for the chansons. The chosen instrumentarium includes shawm, slide trumpet, sackbut, cornetto, recorder, lute, gothic harp and psaltery: an authentic but richly coloured ensemble.

Although there are previous recordings of the Mass and the chansons, all the music recorded here has been newly transcribed from original sources by two of its performers, Min J. Kim and David Brutti. The recording took place in the Umbrian church of San Francesco in Trevi, where the original organ survives, dating from 1508, and thus retaining a sound-world that resembles one known to the likes of Dunstable and Joye.