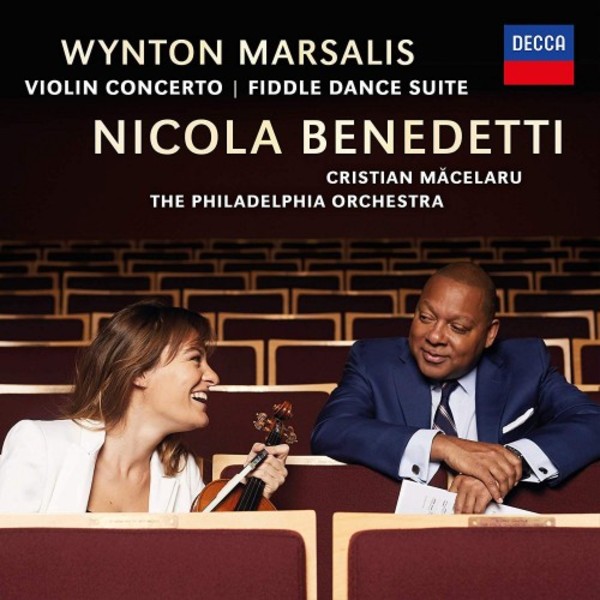 Fusing classical, jazz, Celtic influences and other musical traditions, this is the first time Marsalis has written for classical violin.

An iconic new work renews the rich US tradition of jazz-infused classical music stretching back to Bernstein and Gershwin.

A virtuoso classical violinist and a Grammy Award-winning jazz icon working together.

World premiere recording of these works.

This new disc from Decca is a meeting of two inspirational music educators from either side of the Atlantic: Scottish violinist Nicola Benedetti and American jazz composer and trumpeter Wynton Marsalis. For many years now Marsalis has been the face and sound of the Lincoln Centers jazz programme, while Benedettis activities in music education have made her the recipient of numerous awards (including the Queens Medal for Music and CBE) that belie her 31 years. And, on the evidence of this disc, they clearly find one another mutually inspiring.

The main work is Marsaliss Violin Concerto in D, a substantial 42-minute work written for Benedetti. Though scored for full symphony orchestra, its a celebration of jazz (no surprises there), but also of the links between jazz and its Anglo-Celtic roots and Benedettis own Scottish heritage. Cast in four movements, including a Rondo Burlesque scherzo and a Blues slow movement, it also represents a journey, reflecting Benedettis own travels as a performer and educator.

In fact the most tangible influences here are from the American symphonic jazz tradition (as exemplified by Gershwin and Bernstein), as well as the broader soundscapes of American symphonic music. The opening Rhapsody is initiated by the solo violin whispering its way into dreamy sonorities that are occasionally disrupted by Ivesian dissonances and interjections. The music soon takes on a more nightmarish hue, with plentiful percussion and whistles recalling Bernstein at his most raucous. Eventually, after a cadenza-like passage for the soloist, the music finds some peace, before an infectiously rhythmic slow coda that hints at ancestral folk melodies.

The second movements Rondo Burlesque might suggest Mahler, but the music itself is more traditionally humorous, with circus clowns and Mardi Gras partying both referenced, as well as occasional Bergian sonorities (as in the first movement). In the Blues third movement, Benedetti proves splendidly adept at bending notes with all the skill of a seasoned jazz player. The first section of the movement is accompanied by evocative string harmonies, before whooping brass and percussion bring a more impassioned flavour to the music. As a whole, the movement charts a way from flirtation and courtship, through intimacy to loss and loneliness, and the ending could hardly be more intimately felt.

The Concertos finale is a rousing, stomping Hootenanny with the Philadelphia Orchestra under Cristian Măcelaru in full cry, recalling Copland and Bernstein at their ebullient best, while Benedetti rides the waves of sound with evident glee and abandon, before carrying on her journey with Scottish inflections and a fade-away ending (as she walks offstage still playing) that balances the works whispered opening. Its all tremendously engaging, and the descriptive titles lend Marsaliss unashamedly episodic music a coherence all its own. Benedetti certainly seems to have a whale of a time, and the solo part employs the whole range of violin techniques to dazzling effect. Taken from live performances at the Kimmel Centers Verizon Hall in Philadelphia, the recording (produced by Steven Epstein) achieves an ideal balance between soloist and orchestra, and the whole work positively fizzes from beginning to end.

The coupling is altogether more compact: Marsaliss five-movement Fiddle Dance Suite, another work evidently composed with Benedetti in mind. This one, however, taps more directly into her Scottish heritage, with movements including a Sidestep Reel, a spiritual-like ballad (As the Wind Goes), Jones Jig (an Irish jig), Nicolas Strathspey and Bye-Bye Breakdown (a Saturday-night-barn-dance cum hoedown). Recorded in the Menuhin Hall, Stoke DAbernon, where Benedetti started her musical journey at the Menuhin School. Its a homecoming of sorts, then, but also a hugely enjoyable and challenging suite in its own right, with folk elements subjected to tastefully jazzy inflections and replete with multiple stopping that provides plenty of harmonic support.

For Marsaliss and Benedettis many admirers, this will be an essential acquisition, and as a fusion of jazz and folk traditions within a broadly classical musical idiom, it will surely attract many more listeners still.

A number of things become clearer as Wynton Marsaliss Violin Concerto unfolds. First, that theres a story to be told, an American story; second, that Charles Ives  musical Americas greatest pioneer  has not passed Marsalis by; and third, that the spirit of improvisation  be it from jazz or folklore  is at the heart of its musical personality. ... Marsalis gives his muse, Nicola Benedetti, plenty to get her teeth into. A couple of big cadenzas tap into her Celtic roots and show off her technical prowess. ... And then theres the companion piece  Fiddle Dance Suite  and it is very much the closest of relatives. This is Benedettis solo turn and it sits somewhere between Bachs unaccompanied Partitas and a Celtic shindig...  Edward Seckerson
Gramophone August 2019