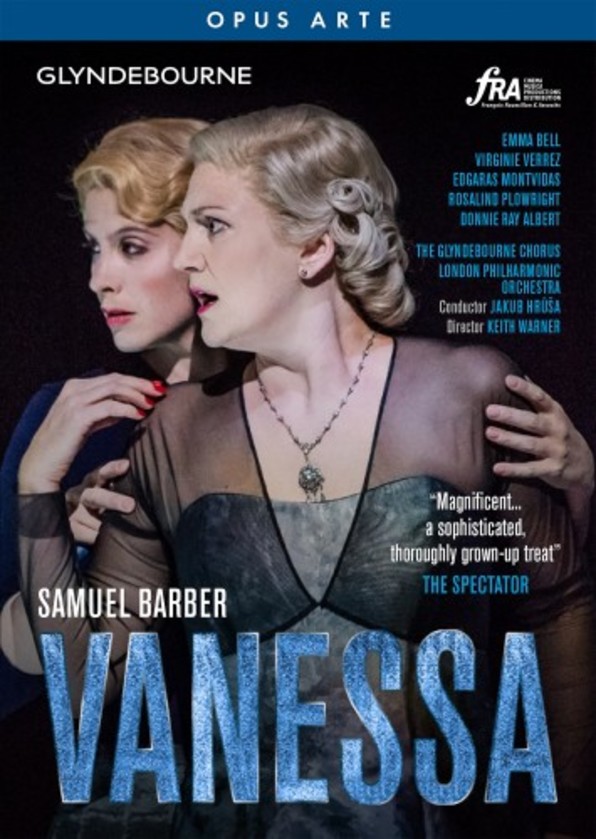 Abandoned by her lover Anatol, Vanessa retreats from the world, waiting and hoping with only her mother and her niece Erika for company. But when, 20 years later, Anatols handsome young son arrives unexpectedly, he shatters the calm of this shuttered household of women. Past and present love collides, and the aftershocks threaten to destroy them all.

Samuel Barbers Pulitzer Prize-winning first opera boasts one of the 20th centurys most beautiful scores. Poised constantly on the edge of song, Vanessa unfolds in generous swathes of melody, rich in filmic strings and soaring brass, with echoes of Puccini, Berg and Strauss. It climaxes in a final quintet of Mozartean poignancy  one of the great ensembles of the contemporary repertoire.

Outstanding performances are a-plenty in this rare opportunity to see one of the 20th centurys great operas. This world premiere recording from Glyndebourne gives centre stage to Emma Bell who performs the titular role with an amazing intensity, with rising star Virginie Verrez and legendary Rosalind Plowright giving equally engrossing performances in this far too little-known masterpiece, in a new production by award winning director, Keith Warner.

its magnificent these are wonderful performances, and this is a beautiful, thought-provoking production  The Spectator

Musically, its hugely impressive, too. Bell gives one of her finest performances to date, beautifully acted, her voice soaring with elation and anguish Jakub Hrůa, conducting with tremendous passion, really opens the emotional floodgates, sweeping us away in the big set pieces, while the London Philharmonic Orchestras playing is at once sumptuous and superbly detailed.  The Guardian ★★★★

Glyndebourne may have turned its attention to Barbers opera belatedly, but they have done him proud.  The Independent ★★★★

Director Keith Warner and stage designer Ashley Martin-Davis bring us a glorious set, in which the mirrors and windows are seen as huge picture frames, sometimes displaying memories behind them, sometimes reflections and sometimes showing what is happening in other parts of the mansion. Its an imaginative way to tell the memory-rich story.  The Express ★★★★

Here now is the production and cast that Vanessa has been waiting for.  ... its Emma Bells Vanessa that holds your eyes and ears. Passionate, trusting, fearful and deluded, she never puts an elegant 1950s foot wrong from the opening wait for the man who is Anatol to their final departure for Paris.  Christopher Cook (Opera Choice)
BBC Music Magazine

Since it was unveiled at last years Glyndebourne Festival, Keith Warners handsome and perceptive staging of Barbers Vanessa has probably done more to silence the works naysayers than any in recent memory. ... Psychological thrillers are none too common in opera and the issue with Vanessa has always been how you put that on stage. ... thanks to Warners perception and motivation this excellent cast really deliver. As do Glyndebournes resident London Philharmonic under the dynamic young Czech Jakub Hrůa. Shadowy, opulent, effulgent  Barbers Vanessa is the opera that bridges Hollywood and the Broadway stage.  Edward Seckerson
Gramophone August 2019

Warning: Unknown: Failed to write session data (files). Please verify that the current setting of session.save_path is correct (/var/lib/php/session) in Unknown on line 0