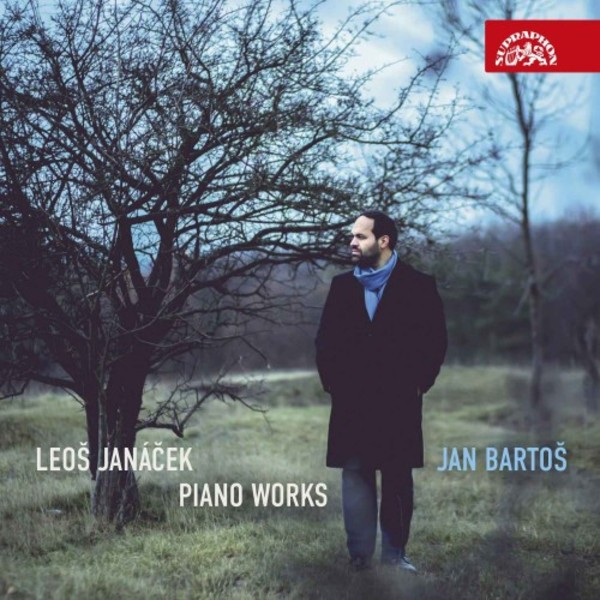 Before he was completely overwhelmed by love for composing, Leo Janáček pursued a career as a virtuoso pianist. He was closely familiar with the instrument, which served for him to share his innermost emotions and feelings. Janáček wrote his first opus, Thema con variazioni, at the age of 26, when he was studying at the Leipzig Conservatory. The miniature piece A Recollection is one of his last scores. The composer conceived his three essential piano works, 1.X.1905, On an Overgrown Path and In the Mists, between 1900 and 1912, which was a difficult phase in his life. They are perhaps the most personal, most intimate pieces he wrote. Janáček was inspired by the sound of the cimbalom, an instrument he often heard when collecting folk songs in Moravia.

The genes of the pianist Jan Barto evidently bear the traces of the ample musical tradition of his ancestors, including his grandfather, a cimbalom player. The legacy of folk music and the Silesian origin is what Janáček and Barto have in common. In his account of Janáčeks music, the pianist reveals a profound musicological insight, as well as a fascinating intuition  the inspiring integration of the heart and the brain, owing to which Bartos previous Supraphon albums (Mozart  Concertos, SU42342; Beethoven  Sonatas, SU42522) have met with such great acclaim.
Performing Janáčeks music entails a major problem. You must play it accurately, since rhythm and time are of vital importance, while you are also often supposed to improvise. More than any other music it can be harmed by anything that comes across as prepared and learned in advance, as something definitive. Its performance should give the impression of being impulsive, as though created here and now. That can, of course, be said about other composers music, yet in Janáčeks case it is absolutely essential.  Jan Barto

Czech pianist Jan Barto has already made a name for himself with a Beethoven double album released just a year ago on the Supraphon label. Now he returns, very much on home territory, with a disc of Janáčeks solo piano music. This is music he knows intimately: he comes from a family of musicians, and is connected on his mothers side of the family with Lucie Bakeová, Janáčeks colleague on a vast project to collect Czech folk dances. So it comes as no surprise that Barto inhabits this music as very few others have, certainly on disc.

Remarkably for a composer who started out with serious ambitions as a concert pianist, Janáček wrote relatively little solo music for the instrument, the majority of it in the years 1900-1912. This was a time of personal tragedy and professional struggle, with the illness and death of his daughter Olga, and a battle for the recognition of his third opera, Jenůfa, and for the premiere of his fourth, Osud (Fate), which was never performed in his lifetime. The inner turmoil surfaces in his two piano cycles, but it was in response to a very public event that Janáček composed the work with which Barto opens the disc, 1.X.1905 On the Street.

At the beginning of October 1905 the campaign to establish a Czech university in Brno, bitterly opposed by the citys German-speaking majority, came to a head with a demonstration and counter-demonstration. During these events, a young Czech worker was bayoneted to death by a soldier, and it was this event that Janáček responded to in the piece, not the only work of his with a social message, but certainly the most striking. Originally a three-movement work, the concluding funeral march was destroyed by the composer before the Brno premiere; later, after a private performance in Prague, he hurled the manuscript of the two remaining movements into the river Vltava. It is only thanks to the copy kept by the works first performer, Ludmila Tučková, that those two movements survived and were eventually published. Sometimes referred to as a Piano Sonata, 1.X.1905 is one of Janáčeks boldest and most searingly intense works, and Barto unerringly captures its painful immediacy with playing of thrilling earthiness combined with a formidable technique.

The cycle of piano miniatures On an Overgrown Path originated in a request for folk-tunes set for harmonium, but the work soon took on a life of its own. The first series of ten pieces was written between 1901 and 1908, each bearing a descriptive title that hints both at a folk background and a journey of inner turmoil. Some are, on the surface at least, cheerful in mood, like the fifth piece They chattered like swallows (the chattering deftly evoked here by Barto), while others, like no.6 Words fail and no.8 Unutterable anguish, clearly reflect the personal tragedy of these years. Barto is in his element in all these pieces: just listen to the way he places the opening of no.3 Come with us! to give it a dance-like lilt. Naturalistic effects like the hooting of the owl in no.10 have an almost improvisatory air to them. Of the second series (1911), Barto demonstrates excellent judgement in only performing the two pieces completed by Janáček, an Andante and an Allegretto; he leaves out both the incomplete third and a further two pieces subsequently appended to the collection by over-enthusiastic editors.

For many, the peak of Janáčeks solo piano music is the four-movement cycle In the Mists (1912), a combination of his own inimitable mature style with echoes of impressionism (Debussy was a composer he much admired). Once again, Barto nails the musics essence: a combination of dreamy reflectiveness and earthy passion, infused with folk-like layered textures that may be fundamentally unpianistic but sound entirely natural at his hands. And again his feeling for unaffected rubato gives moments like the opening of the fourth movement Presto an improvisational freshness that is immediately engaging.

Following the charmingly virtuosic (and immaculately crafted) Thema con variazioni of 1880 (an engagement present to Janáčeks fiancée, and later long-suffering wife, Zdenka), Barto ends this compelling disc with the composers last piano piece, the haunting Reminiscence of 1928, which seems to distill the essence of his late style (with shades of Káťa Kabanová also hovering about). Excellently recorded by the Supraphon team, and with an exceptionally interesting booklet interview between Barto and leading Janáček expert Jiří Zahrádka, this is a disc that deserves to be in any serious Janáček collection, for it just about sweeps the board in this music. And it should be heard by anyone interested in 20th-century piano music, Czech music, or just music per se!

Like his erstwhile teacher Ivan Moravec, Barto accepts and internalises Janáčeks intimate, conversational sound world for what it is, while imbuing the composers often stark textures with a fullness of tonal body and shimmering translucence. ... Bartos gifts for finely honed characterisation further come home to roost throughout the On an Overgrown Path selections. ... an excellently engineered and highly satisfying release that no Janáček lover should miss.  Jed Distler
Gramophone September 2019