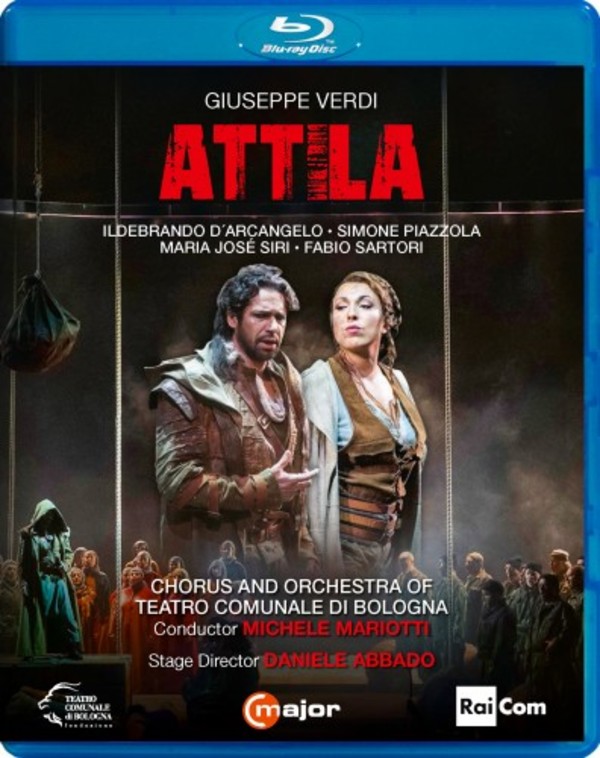 Verdis opera Attila takes as its starting point Attilas plans to storm Rome with his army of Huns and the Romans attempts to prevent him. As with Nabucco and I Lombardi, Verdi spiced up the action with a number of patriotic choruses, guaranteeing that  against the background of the Italian movement for unification  the opera was a great success. Ildebrando DArcangelo is perfect for the serious Verdi roles, Fabio Sartori has a voice of immense brilliance (Opern-Kritik), Simone Piazzola was an impressive Ezio (theoperacritic.com) and the real warrior of this Attila is the soprano Maria José Siri  with her voice, touching each primordial sentiment in every note of the opera, she commanded Attention from everybody (La Repubblica).
Michele Mariotti owes much to the fact that this evening became a celebration of voices - Opern-Kritik
Staged by: Daniele Abbado
Recording date: Teatro Comunale di Bologna, Bologna, 2016
Sound format: PCM Stereo, DTS-HD MA 5.0
Picture: NTSC, 16:9
Subtitles: Italian (original language), English, French, German, Spanish, Korean, Japanese
Booklet: English, German, French
Total running time: 116 mins