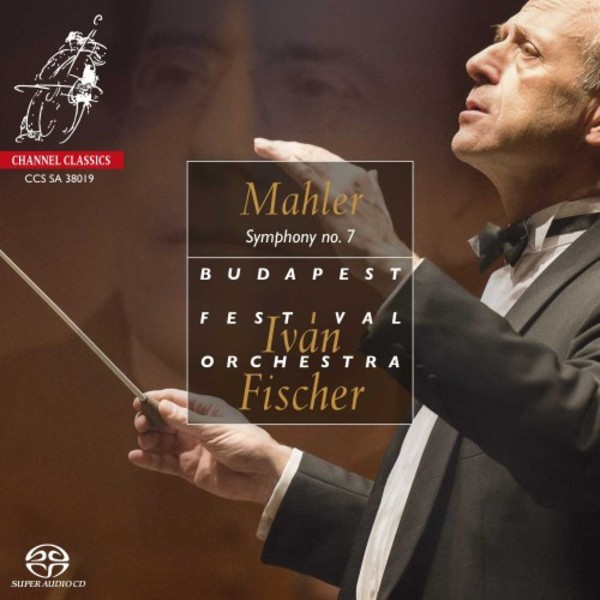 Symphony no.7 in E minor

Symphony no.7 in E minor

I am happy that the Dutch TV company VPRO made a documentary of our recording of this great symphony. This film is available on the internet [YouTube/Mahler 7/Iván Fischer]. It documents my efforts in proving that the last movement of Mahlers Seventh Symphony  despite some doubts of Mahler experts  is a masterpiece. This work is often seen as enigmatic, fragmented, less accessible than the other, beloved Mahler symphonies. May this recording contribute to a revalidation!

Mahler returns here to a perfect balance. He ended the Sixth Symphony in a tragic minor key. Here he offers us the full journey from darkness to light. And what a journey it is! Please note the most magnificant Scherzo framed between the two unique Night Music episodes! I love this Symphony.
 Iván Fischer
When Iván Fischer founded the Budapest Festival Orchestra more than 30 years ago he made a personal dream become true. Core of the philosophy of the orchestra is the total absence of daily routine. It is about taking the risk, the initiative and freedom to do things differently. Every concert is therefore a joyful discovery of uncharted territory, a journey to new horizons in music. It feels unexpected and surprising as if it was played for the very first time. The Festival Orchestra is driven by an openness towards the new and the unknown, by curiosity and attention to details. It is the innovative approach to music, the musicians dedication and their permanent strive for excellence that made Budapest Festival Orchestra the youngest of the top 10 ranked ensembles in the world.
This recording conludes the Mahler Symphony Series on Channel Classics.

It will no doubt dismay some of Iván Fischers many admirers that his Mahler series with the Budapest Festival Orchestra, started back in 2005 with the Sixth Symphony, will include neither the Eighth nor the Tenth symphonies. Yet in concluding (if not completing) the series with the Cinderella of the cycle, the Seventh, he does Mahler as much service as many more complete surveys. The Seventh has long been regarded as a problematic work, chiefly on account of its finale, which seems to teeter between celebration and heavy-handed irony. Yet for many Mahlerians it remains at the apex of the composers symphonic output, distilling the most distinctive features of his fabulously eclectic style and perfecting the five-movement form (two large outer movements framing three intermezzo-like central ones) already essayed in the Second and Fifth symphonies.

In an absorbing 45-minute video documentary about the recording (available on YouTube and via the Europadisc website), Fischer reveals his admiration for Mahlers bold, honest and forward-looking eclecticism, as well as its influences on his own musical style. (There are also some fascinating excerpts from Fischers 2013 music-theatre piece The Red Heifer.) This admiration is clearly infectious, for the Budapest Festival Orchestra deliver what must count as one of the most unaffectedly joyous accounts of the Seventh ever committed to disc.

The very opening gives a taster of whats in store: that memorable rhythmic figure, said to have been inspired by the oar-strokes as Mahler was ferried across an Alpine lake, with beautifully mellow, woody clarinet tone to the fore, and then the tenor horn solo with a hint of Central European vibrato. Fischer and his players know just how to combine modern technical perfection with a sense of tradition that never lapses into faux nostalgia. And they also know just how to balance the impulsive with the reflective: there is plenty of urgency to this performance (one of the many reasons for its success), but Fischer knows just when to create more space, aided by sumptuous but lovingly detailed recorded sound. This may be a less intensely personal work than the Sixth Symphony (composition of the two symphonies overlapped), but there is no coolness to Mahlers objectivity here, rather a delight in music for musics sake.

Those crucial central movements (often so difficult to bring off convincingly) go like a dream here. The opening of the first Nachtmusik sounds utterly spontaneous, revelling in the sounds of nature, and no doubt the result of detailed work on rhythmic, dynamic and accentual placement. Perfect poise gives way to the spooky shadows of the central Scherzo, the various strands of Mahlers deft chiaroscuro moving in and out of focus as if in a particularly vivid nightmare. In Fischers hands, this movement emerges as perhaps Mahlers greatest Scherzo (which is saying much), unerringly paced throughout. As for the second Nachtmusik, Fischer manages to deliver emotion without over-egging the pudding à la Bernstein: this is the closest we get to a slow movement in this work, but its marked Andante amoroso (not Adagio amoroso), and the vivid scoring with guitar and mandolin suggests a genial nocturnal serenade, which is exactly what we get here.

In the Rondo-Finale, Fischer keeps a tight rein on proceedings with bracing tempi reminiscent of Kubelík and Kondrashin at their best, but with even finer orchestral playing. Taking the music at face value, but well aware of all the many stylistic nods along the way, Fischer and the Budapest players revel in the unfolding tableau with playing of rich tonal depths but also delightfully light, almost classical sonorities. If there is any hint of irony in this music, it is left for the listener to decide: what this performance gives is an emotionally open performance paced and played to utter perfection. You may well find yourself dancing along to this supposedly problematic music, discovering for yourself the musics superabundant humanity, as these musicians evidently have.

Maybe one day someone will be able to persuade Fischer to tackle the gargantuan Eighth, but other great Mahlerians have given it and several other works a wide berth (think of Klemperer), while others still have come to it late (Abbado and Rattle, for instance). For now, though, its difficult to think of a more joyous conclusion to the Budapest Mahler project than this ear- and mind-opening performance of the Seventh. It should be heard by lovers of Mahlers music everywhere.

I honestly cant remember hearing a performance of this extraordinary symphony that was so plainly in love with its ethos, its originality, its sonority. Iván Fischer reads the small print of the score with such thoroughness that he makes most other readings feel like generalisations by comparison. Its one of those performances that makes one think of the piece differently, and that in itself is cause for celebration and reassessment.  there is a joyousness about this account that tells you not just how much Iván Fischer loves this symphony but how he loves it unconditionally.  Edward Seckerson (Recording of the Month)
Gramophone April 2019

In a field graced by so many magnificent recordings of this hugely taxing symphony, where meticulous preparation must be the keynote, this has immediately become my ideal. ... [The finale] needs careful pacing, and Iván Fischer contrasts gracious, chamber-textured dances with brilliant fanfares and toppling masses to absolute perfection.  David Nice (Orchestral Choice)
BBC Music Magazine June 2019

In sorrow or joy, everything is richly textured, heralded from the start by a haunting tenor horn, the first of many gorgeously earthy wind colours from an orchestra and conductor who seem constitutionally unable to generate a boring sound. ... Whatever the musics mood, I found Fischers reading utterly compelling and a spring tonic.
The Times April 2019

Iván Fischer follows his revitalising Third with a similarly talented Seventh; as before, the engineering is first rate
MusicWeb International

every phrase moulded with care, each emotional nuance embraced with affection ... he makes me love it as much as he says he does
Record Review (BBC Radio 3)