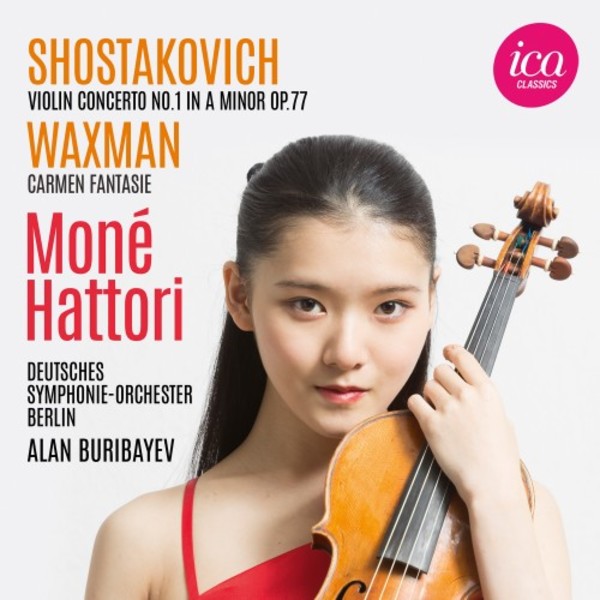 Born in Tokyo in 1999, Moné Hattori came from a musical family. After studies in Japan with Auguri Suzuki and Yasuko Ohtani she made her concerto debut aged eight, and enrolled in Zakhar Brons prestigious Academy in Interlaken, Switzerland.

At age ten, Hattori became the youngest ever winner of the 11th Karol Lipiński/Henryk Wieniawski Competition in Poland in 2009 and in 2015 she won the Grand Prix in the International Boris Goldstein Violin Competition in Bern, Switzerland. She performs regularly with the leading Japanese orchestras including the New Japan Philharmonic, NHK Symphony and Tokyo Philharmonic, and has worked in chamber concerts with Natalia Gutman and Vadim Repin. She has appeared nationwide on Japanese TV to an audience of 14,000 in Tokyo.

Hattori has toured in Europe with the European Union Youth Orchestra and Vladimir Ashkenazy, and made her Scandinavian debut in a recital at Den Norske Opera, Oslo. Forthcoming highlights include tours of Israel (Israel Camerata) and Germany (Franz Liszt Chamber Orchestra) and she will make her Berlin debut with the Rundfunk-Symphonieorchester under Vladimir Jurowski.

Her debut recording featuring Franz Waxmans virtuoso showpiece Carmen-Fantasie is technically brilliant as well as being a rarity on record. The work is part of Waxmans score to the 1946 movie Humoresque which received an Academy Award. It was initially meant to be played by Jascha Heifetz but he was replaced by Isaac Stern for the film soundtrack. After seeing the film, Heifetz asked Waxman to expand the work and it was premiered in September 1946.

Shostakovichs magnificent Violin Concerto No.1 completes the CD, with the Deutsches Symphonie-Orchester Berlin under conductor Alan Buribayev. The CD was released in Japan by Amex Classics in 2016 and received very enthusiastic reviews, I was reminded of the debut of Hilary Hahn...her outstanding talent really comes across clearly...listening to her play Shostakovichs great cadenza, Im sure I am not the only one who felt a shiver run down their spine (Stereo Review).

Moné Hattori is described as the crowning masterpiece of Zakhar Brons talent academy  certain to be at the forefront of the worlds best violinists (Jungfrau Zeitung, Switzerland).