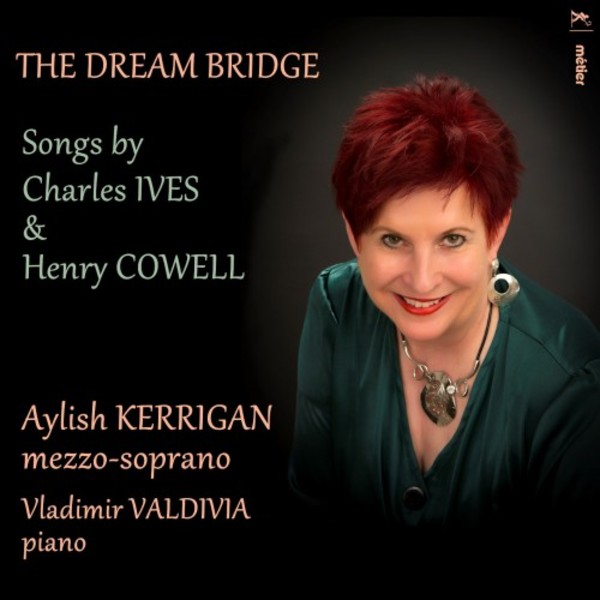 Aeolian Harp
April
Because the Cat
How Old is Song?
Mice Lament
Music When Soft Voices Die
Songs of Padraic Colum (3)
St Agnes Morning
The Dream Bridge
Tides of Manaunaun
Where She Lies

Aeolian Harp
April
Because the Cat
How Old is Song?
Mice Lament
Music When Soft Voices Die
Songs of Padraic Colum (3)
St Agnes Morning
The Dream Bridge
Tides of Manaunaun
Where She Lies

Charles Ives and Henry Cowell are two of the greatest figures in the history of early American experimental music. Ives has enjoyed far greater recognition in the vocal repertoire than Cowell, largely due to the latters lack of published songs. The songs chosen for this collection offer a glimpse into one aspect of the remarkable output of both composers.

Charles Ives (1874-1954) is rightfully called the father of contemporary American music. Fiercely individual as a composer, he was an innovator and a loner with a brilliant, creative mind. The songs chosen for this album range from the simplistic to the most complex, and represent the eclectic range of styles Ives used in his vocal compositions. His use of jazz idioms, pop songs, religious revival tunes and much more  often overlapping  created a unique style which has never been successfully matched. Henry Cowell (1897-1965) was deeply interested in spiritualism and mythology and wrote over 180 songs, most of which are unpublished and secreted away in libraries. Several manuscripts were obtained with the help of researchers to make this recording possible.

Aylish Kerrigan is one of the foremost interpreters of contemporary Irish vocal music, and of Brecht, and her one-woman Broadway-style shows won acclaim when given in New York, Paris, Berlin and Dublin. Her accompanist Vladimir Valdivia is from Peru and has performed around the world. He has worked with Aylish Kerrigan for ten years.