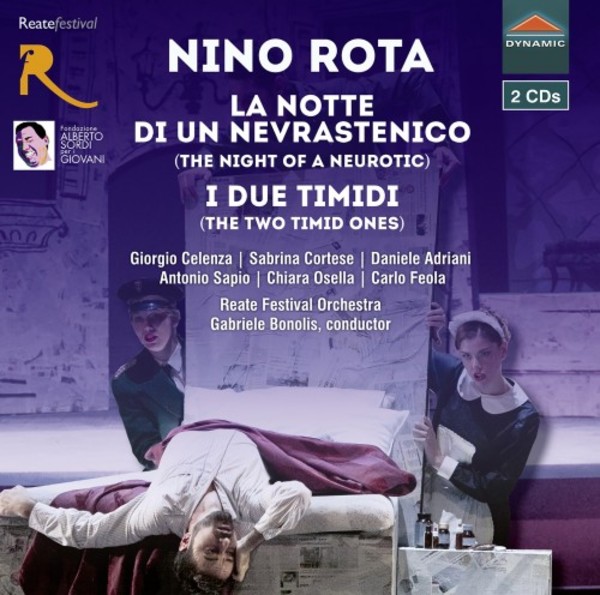 Known chiefly for his cinema soundtracks and his lifelong relationship with iconic directors such as Federico Fellini, Francis Ford Coppola and Luchino Visconti (to name but a few), Rota was a musical enfant prodige who composed sacred music as well as operas from a very young age. Endowed with a streak of freedom, creativity and imagination that allowed him to forge his own unique style, he succeeded in merging the great Italian operatic tradition of Rossini, Puccini and Verdi with a contemporary musical language, setting himself apart from his contemporaries in the process.

La notte di un nevrastenico (The Night of a Neurotic) premiered at the Piccola Scala in 1960; the libretto is by Riccardo Bacchelli. Its a short farce with a tragic, unexpected ending. Centre stage we find the neurotics bed, which is the altar on which he sacrifices his own sanity.

I due timidi (The Two Timid Ones) was broadcast by Milans RAI in 1950 and first staged in London in 1952. Based on a text by the Italian screen writer Suso Cecchi DAmico, its a comedy of errors. Although it lacks the usual happy ending, the pace of the musical action and the skills of the young actor-singers make the performance most enjoyable.

Both the singers and the set design manage to convey a sense of suspense, with an oppressive, yet oddly amusing ambience the whole cast delivered a great performance and mastered the stage with excellent acting and vocal skills.  Giornaledellamusica.it on La notte di un nevrastenico

The pace of the narration changes continuously: frenzied rhythms suddenly shift to broad vocal declamations à la Puccini, with interludes reminiscent of jazz and the buffo style. Despite the richness and heterogeneity of the musical material, the singers always manage to stay vocally balanced, showing great acting abilities, as well Conductor Gabriele Bonolis and his orchestra received midperformance applause for an energetic, fresh and brilliant performance.  Quinteparallele.net on I due timidi