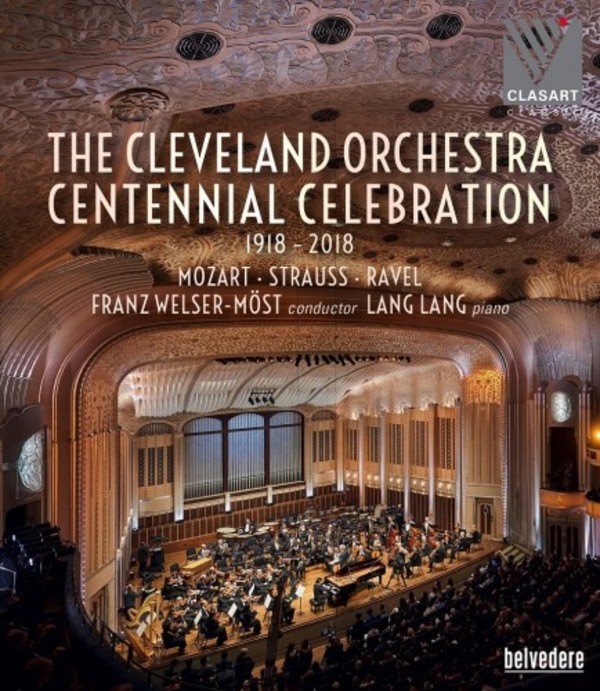 The Cleveland Orchestra was founded in 1918. Over the ensuing decades, the Orchestra quickly grew from a fine regional organisation to being one of the most admired symphony orchestras in the world. Seven music directors have guided and shaped the ensembles growth and sound: Nikolai Sokoloff, 1918-33; Artur Rodzinski, 1933-43; Erich Leinsdorf, 1943-46; George Szell, 1946-70; Lorin Maazel, 1972-82; Christoph von Dohnányi, 1984-2002; and Franz Welser-Möst, since 2002.

Franz Welser-Möst has also conducted The Cleveland Orchestra in a series of acclaimed video and audio productions, further enhancing the ensembles recorded legacy. At the Anniversary Gala on September 29 2018, documented in the present video recording, he programmed works touching on more than a century of Viennese musical traditions. Opening with Mozarts Piano Concerto no.24, featuring soloist Lang Lang - a regular collaborator with the orchestra since 2000 - it also includes works by Richard and Johann Strauss, concluding with Ravels cataclysmic La Valse.

The opening in 1931 in Severance Hall (the Orchestras permanent home), brought a special pride to the ensemble and its hometown, as well as providing an enviable and intimate acoustic environment in which to develop and refine the Orchestras artistry. Touring performances throughout the United States and, beginning in 1957, to Europe and across the globe have confirmed Clevelands place among the worlds top orchestras.

For this anniversary concert, The Cleveland Orchestra is joined by none less than world-famous pianist Lang Lang. Heralded by the New York Times as the hottest artist on the classical music planet, Lang Lang works with many of the best classical musicians of our time. He first appeared with The Cleveland Orchestra in 2000. Lang Lang sold-out concerts in major concert halls around the world, is known for thinking outside the box, and frequently steps into different musical worlds, teaming up with artists from diverse genres. His tireless energy and boundless drive to attract new audiences to classical music have brought him many titles and awards. He won First Prize at the International Tchaikovsky Competition for Young Musicians at 13. His big break came at age 17 substituting for André Watts playing Tchaikovskys First Piano Concerto.
Sound Formats: LPCM Stereo, DTS-HD Master Audio 5.1
Picture Format: 1080p High Definition 16:9
Region Code: Worldwide
Total Duration: 81 mins (Concert) + 9 mins (Bonus)
Disc Format: BD 25