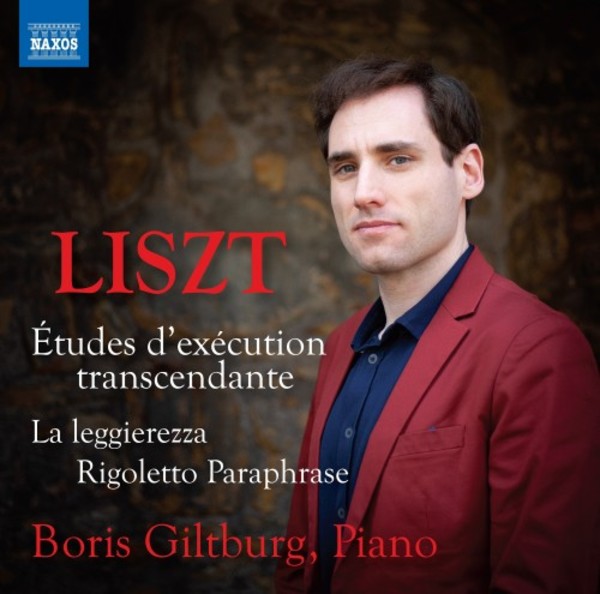 Liszts Études dexécution transcendante enshrine the spirit of High Romanticism, embodying extremes of expressive drama and technical virtuosity. His encyclopedic approach to technique is shown at its most dazzling in this cycle, heard here in the 1852 revision which Liszt himself declared the only authentic one. Integration of musical and technical elements is absolute, and the musics narratives are supported by dramatic physicality, an orchestral richness of sonority, and an exceptional colouristic quality.
The young Moscow-born Israeli pianist Boris Giltburg is lauded across the globe as a deeply sensitive, insightful and compelling musician. Born in 1984 in Moscow, he moved to Tel Aviv at an early age, studying with his mother and then with Arie Vardi. He went on to win numerous awards, most recently the Second (and audience) Prize at the Rubinstein Competition in 2011, and in 2013 he won First Prize at the Queen Elisabeth Competition, catapulting his career to a new level. In 2015 he began a long-term recording plan with Naxos. At home with repertoire ranging from Beethoven to Shostakovich, in recent years he has been increasingly recognised as a leading interpreter of Rachmaninov. Boris is an avid amateur photographer and blogger, writing about classical music for a non-specialist audience.
Boris Giltburgs recordings for Naxos received numerous praises and awards. Recently he won Best Soloist Recording (20th/21st century) at the inaugural Opus Klassik Awards for his recording of Rachmaninovs Second Piano Concerto with the Royal Scottish National Orchestra and Carlos Miguel Prieto, coupled with the Études-tableaux (8573629). In May 2018 Naxos released his recording of the Third Piano Concerto and Corelli Variations with the same forces (8573630), which has already garnered spectacular reviews including a Gramophone Choice award.
He won a Diapason dOr for his first concerto recording  the Shostakovich concerti with the Royal Liverpool Philharmonic and Vasily Petrenko, coupled with his own arrangement of Shostakovichs Eighth String Quartet (8573666)  and his solo recordings of Schumann (8573399) and Beethoven (8573400) have been similarly well received.
Boris Giltburg has appeared with many leading orchestras such as the Deutsche Kammerphilharmonie, the Philharmonia Orchestra, the Israel Philharmonic, the NHK Symphony, the Deutsche Symphonie-Orchester Berlin, the Frankfurt Radio Symphony, the London Philharmonic Orchestra, the Oslo Philharmonic, the St Petersburg Philharmonic and the Baltimore Symphony. He made his BBC Proms debut in 2010, his Australian debut in 2017 (with the Adelaide and Tasmanian Symphony Orchestras), and has frequently toured South America and China, as well as Germany with the Orchestre National du Capitole de Toulouse. He has played recitals in leading venues such as the Hamburg Elbphilharmonie, Carnegie Hall, the Southbank Centre in London, the Louvre, and the Amsterdam Concertgebouw.