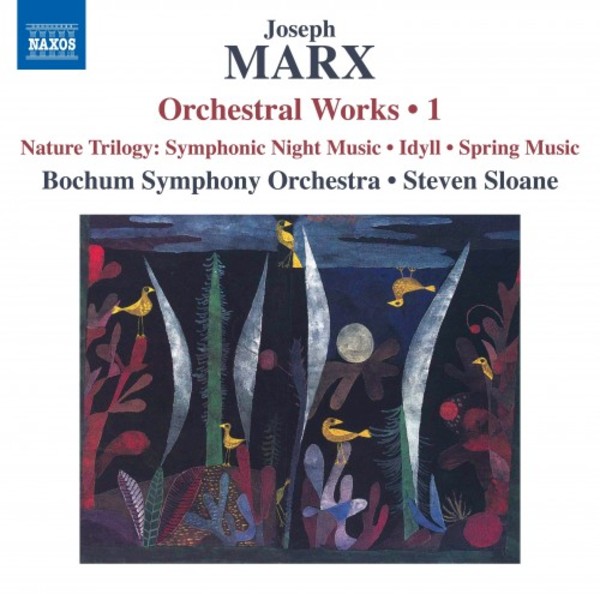 Joseph Marx (1882-1964) was one of the leading figures of Austrian musical culture during his lifetime, but his music was out of step with 20th-century modernism and most of his music disappeared from concert programmes after his death. The Natur-Trilogie is a richly impressionistic work that brims with lyrical passion, portraying the moods of Marxs untouched native landscapes while displaying his magical feel for harmony and orchestration. This recordings original release was the first time the Natur-Trilogie had been heard in its complete and original form, and was considered a major discovery by MusicWeb International.
This recording was first released in 2003 on the ASV label, and is the first in a four-volume set of Joseph Marxs orchestral works to be re-released on Naxos. Having these titles available once more will be much appreciated by innumerable collectors seeking new repertoire to slake a thirst for lush, impressionistic orchestral sounds.
Critical acclaim for this recording came from reviewer Rob Barnett, then Classical Editor of MusicWeb International: This is unambiguously the work of a nature ecstatic. If you already count Baxs nature canvasses among your favourite works then you will be losing out if you do not get this excellent disc. The music is discursively rhapsodic, sunny, bold, soused in melody and eloquent with the voices of nature... An impressionistic South German voice soaked in the quintessence of lyrical expression. This is already my record of the month and will be on my list of recordings of the year. A major discovery and a harbinger of later releases which, if up to this strength, will change the shape of the catalogue forever.