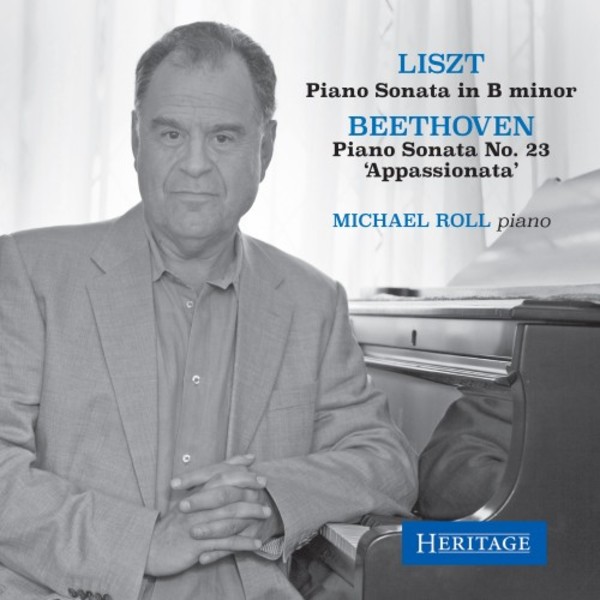 Since winning the inaugural Leeds International Piano Competition in 1963, Michael Roll has enjoyed a hugely successful career on the concert platform performing to audiences worldwide. His recorded legacy, however, is surprisingly small.  This CD includes a previously unreleased and unedited 1978 studio performance of the Liszt Sonata and a live recording of Beethovens Appassionata from 2008.

Born in Britain, the son of Viennese Jewish parents, Roll began his studies with Fanny Waterman at the age of six and was a prolific performer from an early age. He made his concerto debut at ten with the City of Birmingham Symphony Orchestra, and at the age of twelve, played Schumanns Piano Concerto with the National Youth Orchestra of Great Britain and Sir Malcom Sargent and at fourteen Beethovens Third Concerto with the Hallé Orchestra and Sir John Barbirolli.

His success at Leeds led to appearances worldwide, working with conductors such as Boulez, Boult, Giulini, Haitink, Masur, Previn, Sawallisch, Sanderling and more recently Gergiev and Steinberg. Orchestras have included the London Symphony, London Philharmonic, Royal Philharmonic, BBC Symphony, Leipzig Gewandhaus and Boston Symphony orchestras, with whom Michael made his American debut in 1974 with Sir Colin Davis. International festivals have included Vienna, Edinburgh, Hong Kong and Aldeburgh, where he performed together with Benjamin Britten. He has also appeared on sixteen occasions at the Promenade concerts at the Royal Albert Hall in London.

He is an outstanding interesting artist with a magisterial technique and with a happy combination of interpretative impulse and logic. - The Daily Telegraph

He is obviously musical from heart and mind to his fingertips. - Sir Neville Cardus, The Guardian

No country can be expected to produce many talents of this order. - The Sunday Times

Beethoven - The Creatures of Prometheus (arr. for piano), Eroica Variations

The Art of Myra Hess