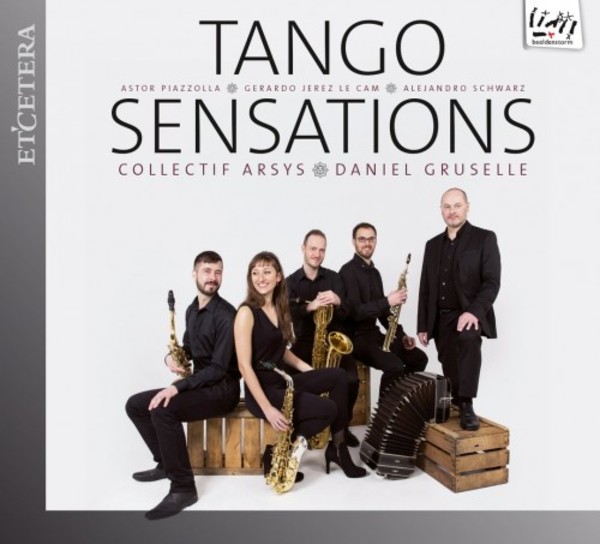 Tango Sensations once again perfectly illustrates the intensity of the tango nuevo culture. Daniel Gruselle and the Collectif Arsys have made the immortal features of the Latin American musical culture their own in the shape of a magical CD.

Who would have thought that, when many Argentines were in Exile during the Era of Terror established by the Military Junta in the country from 1976 to 1983, the arrival in Europe of musicians such as Astor Piazzolla or Juan Jose Mosalini would see the birth of a genuine artistic movement which would go beyond the phenomenon of a new representation of World Music. Nadia Boulanger predicted this when emphatically saying to Piazzolla: You will become the Bartok of your country.

This singular and creative energy manifests itself nowadays not only in the way this great Masters work is revisited but also in the compositions of a generation of musicians, often of classical formation, who have since become the link between tradition and innovation. Like Gustavo Beytelmann, Tomas Gubitsch, Osvaldo Calo and others, Gerardo Jerez Le Cam and Alejandro Schwarz lead us here into a world of mixed emotions, filled with scents and ambiances of their country of birth, the Great Argentina, when alluding to the effervescence of Buenos Aires atmosphere or flying to more remote inspiration.

These demanding music scores, written with sharp rhythms, expressionist flights and velvet sounds require performers to bring along the full potential of their instrument, their emotional wealth and their aptitude to find the greatest possible cohesion of their ensemble. Among the many qualities that can be found in this recording, the clearness of this interpretation, fully serving a music piece stands out, as well as each musicians lyric commitment and the chemistry created by the timbres fusion in this saxophone and bandoneon quartet, without ever altering the depth that these compositions require. This CD is a testament to the relevance of such a gathering of musicians from different backgrounds, where excellence is the main focus.