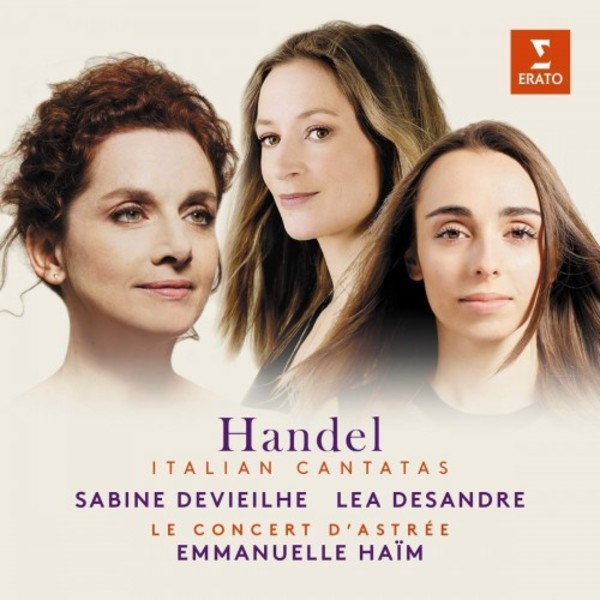 Surprisingly, the cantatas that Handel wrote in the earlier years of his career remain relatively little known. The thrilling theatricality of three works composed in Italy  Armida abbandonata, La Lucrezia and Aminta e Fillide is savoured to the full by conductor Emmanuelle Haïm, soprano Sabine Devieilhe, mezzo-soprano Léa Desandre and the instrumentalists of Le Concert dAstrée.

Handels Italian cantatas, composed during his sojourns in Rome between 1706 and 1709, have long been among the most underappreciated works in his output, certainly in the Anglophone world where his oratorios, operas and instrumental works have long hogged the limelight. Yet in many respects they lay the foundation for his style, absorbing Italianate influences as well as finding his own distinctive voice in music of powerful emotion and inventiveness. Handel himself appreciated their many fine qualities, judging by the number of times he plundered their music when writing later works.

Recent years have seen a long overdue blossoming of interest in these marvellous early fruits, with a whole series of discs from La Risonanza under Fabio Biondi on the Glossa label, and most recently a fine collection of solo cantatas from Carolyn Sampson and The Kings Consort on Vivat. And now the Concert dAstrée under Emmanuelle Haïm contribute a classy pair of discs featuring some of the very best of these works with a pair of singers who could hardly be bettered in todays early music circuit: soprano Sabine Devieilhe and mezzo Lea Desandre.

The three cantatas on this generously priced set were all among the works Handel presented to one of his chief Roman patrons, the Marquis de Ruspoli, and they cover the three essential subgenres of solo voice with continuo (La Lucrezia), solo voice with strings (Armida abbandonata) and two voices with strings (Aminta e Fillide). Their formal dimensions encompass both expanded scenas (Lucrezia and Armida) and miniature pastoral opera (Aminta e Fillide), but it is their expressive that is most striking, from the gentle exploration of emotional discovery between a nymph and her swain in the latter work to the high drama and vocal fireworks of the two classically themed pieces.

The first disc is devoted to Aminta e Fillide, which at over 50 minutes is one of the most extended of Handels Italian cantatas. Devieilhe as the shepherd Aminta and Desandre as Fillide, the object of his affections, are beautifully matched, yet sufficiently distinct in timbre for the drama to be followed clearly. The opening begins like an overture, but the way in which it suddenly gives way to Aminta as he implores Fillide to stop fleeing is as gripping an opening entry as youll find in any opera.

With just six violins, single viola, cello and bass plus lute, harpsichord and organ continuo, the Concert dAstrée under Haïms alert direction uncovers an unexpected range of colours. Haïm herself wrote the often dazzling, sometimes stratospheric ornaments for the da capo arias, and while some may find them occasionally excessive, theres no doubting their expressive effectiveness. As for the music itself, youd never expect such a variety of moods and inventiveness in a succession of recitatives and arias. Highlights include Amintas A dispetto di sorte crudele with its catchy instrumental ritornello and glorious high notes, and Fillides È un foco quel damore (completely with provocatively inflected upbeats) and Non si può dar un cor sì felice in amor, which radiates pastoral benevolence.

All turns out well for Aminta and Fillide; not so for the unhappy heroines on disc 2. The abandoned Armida, deserted by Rinaldo, is a story from Torquato Tassos Gerusalemme liberta (1581) that Handel would revisit in his 1711 opera Rinaldo. Armidas emotions range from despair to vengeful scorn, all drawn brilliantly by Devielhes crystal-clear voice. The first of three arias, Ah crudele! is kept moving (at a little over five minutes, its just two-thirds the duration of Carolyn Sampsons recent recording!), placing more emotional weight on the concluding, gently inflected In tanti affanni miei. This is a magical account of one of the most popular of these cantatas, which leads neatly into finely nuanced performance of the B minor Trio Sonata, op.2 no.1, a product of some ten years later but by no means inappropriate in this context.

The concluding work is a deeply felt account of La Lucrezia, exploring the devastating emotions of the raped Lucretia: vulnerable, despairing, but also proud and vengeful. Here Lea Desandre delpoys a voice of great power and sensitivity, with rich lower notes and full emotional engagement. Right up to the shocking ending this an immensely gripping performance, and it reveals not only a work of nascent operatic genius but also a bright new star in the early music firmament.

With a warmer, more resonant acoustic than the recent rather dry Sampson disc, this is an ideal introduction to these enthralling works which will also appeal to those who already know them. Presentation and documentation match the impressive quality of the performances themselves.

This production is a delight throughout. For Handels greatest Italian cantatas, Emmanuelle Haïm brings together two stars: soprano Sabine Devieilhe, known above all for her leadership of opera on France, and the prize-winning young mezzo Léa Desandre. ... Vocally the casting is perfect. ... You might think you know these cantatas, but this is a performance to make you think again.  Berta Joncus (Choral & Song Choice)
BBC Music Magazine February 2019

Both singers have unblemished voices of beautiful quality: Sabine Devieilhe, as Aminta, pellucid and free-soaring, Lea Desandre with a dark flare in her high mezzo. They contrast more sharply than their counterparts on the rival recordings, yet blend exquisitely in the final duet in praise of compassion and fidelity. ... Reviewers are paid partly to look for trouble. There simply isnt any, in a disc that even amid fierce competition is a Handelian winner.  Richard Wigmore (Recording of the Month)
Gramophone December 2018