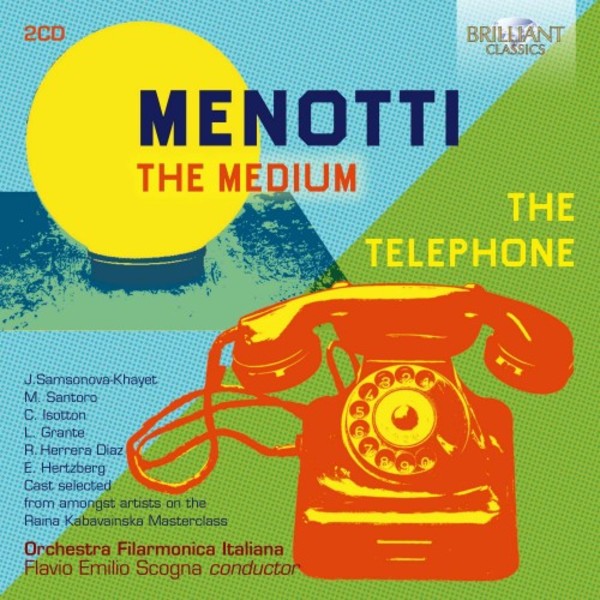 Menotti - The Medium, The Telephone

The Medium
The Telephone

The Medium
The Telephone

A major new, native recording of a sparkling operatic double-bill. After Amelia goes to the ball was staged in 1937 at the Metropolitan Opera with acclaim, Gian Carlo Menotti became hot property. Two further radio operas were comparative failures but it was with The Medium that Menotti really hit his stride. A tragedy in two acts for five singers, a dance-mime role and a chamber orchestra of 14 players, Menottis opera is both dramatically astute in the Puccini tradition and composed with an acute ear for mood and mystery: the score, often quite dissonant, conveys an eerie, morbid atmosphere. According to the composer, The Medium is actually a play of ideas. It describes the tragedy of a woman caught between two worlds, a world of reality which she cannot wholly comprehend, and a supernatural world in which she cannot believe.

Premiered in 1945, The Medium received its first Broadway staging two years later, with a hugely successful a run of 212 performances at the Ethel Barrymore Theatre on Broadway. As a curtain-raiser for these performances (and a striking contrast), Menotti wrote a light one-act comedy in the opera buffa tradition, The Telephone, which he sub-titled Lamour à trois. The operas central role of Lucy became a huge success for its first interpreter, Marilyn Cotlow, and now the young American soprano Elizabeth Hertzberg steps into her shoes with an assured portrayal.

Made under studio conditions in Modena in 2018, these recordings took place in association with semi-staged performances given by artists on the distinguished Raina Kabaivanska Masterclass programme. According to the Giornale della Musica, Hertzberg was excellent as Lucy, and more critical praise was directed towards the fluent and insightful conducting of Scogna. There are comparatively few modern recordings to rival the classic 1947 recording; an essential acquisition for avid listeners of 20th century music theatre.