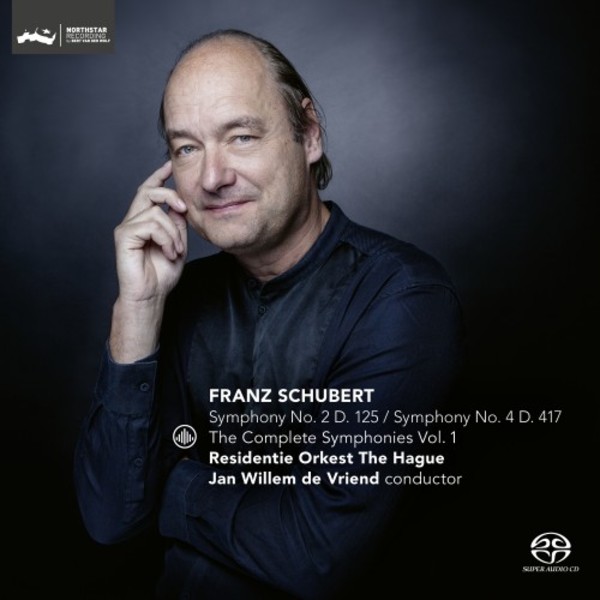 After completing the symphonic cycles of Beethoven and Mendelssohn, Jan Willem de Vriend undertakes to record Schuberts complete symphonic output. The first volume comprises Symphonies no.2 (composed when Schubert was 17) and no.4 (the best-known of his youth symphonies).

Schubert composed his first five symphonies while still a teenager, but they represent just one facet of his prodigious fluency. At this time some of his musical ideas bear a family resemblance to certain themes from Mozart, Haydn and Beethoven, but already his own musical character is evident. He began his Second Symphony in December 1814 and had finished it by 24 March the following year. He completed the Fourth Symphony in about three to four weeks during April 1816. We should not read too much into the Fourth Symphonys Tragic appendage, added by Schubert as an afterthought. It may be merely an example of the flippant comments which he wrote on some of his youthful scores, but nevertheless the symphony has more gravitas than its predecessors and it is the only piece of non-programmatic music to which he gave a descriptive title.

Jan Willem de Vriend and the Den Haag orchestra are among Challenge Classics most faithful partners. Its reputation as one of the finest orchestras in Europe makes it an appropriate figurehead for The Hague as a cosmopolitan city of justice, peace, and culture. The orchestra performs concert series in the Zuiderstrandtheater in Scheveningen and in addition performs at venues such as Concertgebouw Amsterdam, TivoliVredenburg Utrecht and De Doelen in Rotterdam. Special crossover and innovative productions are also provided at The Hagues prominent pop venue Paard van Troje throughout the season.

The Residentie Orkest performs regularly at various other major concert halls abroad. Tours have brought the orchestra to New York, Boston, Chicago, London and Vienna amongst others and the orchestra also performed in countries like Japan, China, Germany, France and South America. There are also many prolific collaborations with a wide range of partners, including the Dutch National Theatre, Gemeentemuseum and the Dutch National Opera. Recent seasons have seen a much acclaimed production of Messiaens rarely performed opera Saint Francois dAsisse, Poulencs Dialogues des Carmelites and Puccinis La Boheme.