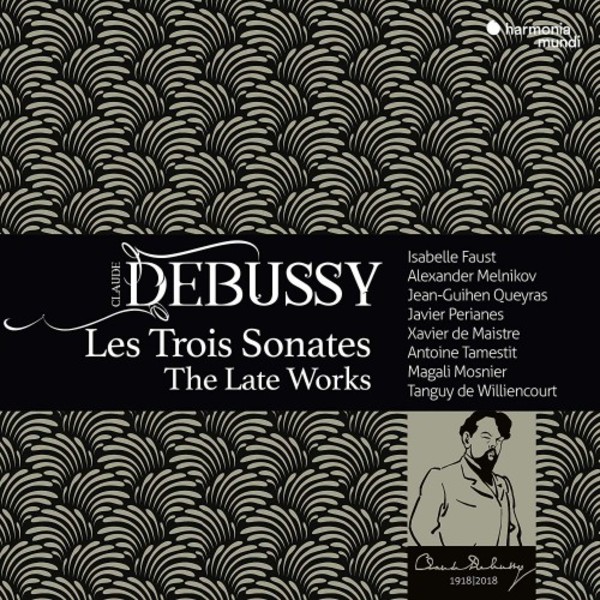 A century after his death on 25 March 1918, many Harmonia Mundi artists are eager to pay tribute to Claude Debussy, the magician of melody and timbre, the great colourist and father of modern music.

In the three chamber sonatas, here combined with the composers final pieces for solo piano, we attain the purity, the absolute concision, the distant and mysterious world that give these works a testamentary dimension.

This years Debussy centenary has brought a veritable deluge of releases from record labels large and small, offering rich pickings for lovers of the composers music. Alongside the complete box sets from major companies Universal and Warner, and individual releases from all and sundry, one of the most distinctive contributions has been an ongoing series of discs from the esteemed French label Harmonia Mundi, paying tribute above all to Debussy the colourist and involving many of their major artists. With each disc handsomely presented in its own slimline box, the series has already given us some outstanding performances of Debussys orchestral, piano and chamber works, including a benchmark account of Book 2 of the piano Préludes from Alexander Melnikov, and an impressive La Mer together with other orchestral works from Pablo Heras Casado and the Philharmonia. And the latest release in the series maintains the high standards already set, with moving accounts of the three late sonatas interleaved with Debussys last four piano pieces.

The sonatas for cello and piano (1915), flute, viola and harp (1915), and violin and piano (1916-17) were the only completed works of a projected series of six that Debussy envisaged on returning to composition after a fallow period brought on by the outbreak of the Great War and the beginning of his own battle against the cancer that was eventually to claim his life in March 1918. In them he sought a return to the values of the great French clavecinistes of the Baroque era, while simultaneously distilling his own style to new levels. As a group of three, these sonatas have been much recorded on disc, most recently by Renaud Capucon, Emanuel Pahud et al on Erato. But these new Harmonia Mundi accounts present strong competition, revelling in not just the range of colours that Debussy conjures forth, but also the radical motivic interplay that backs up the composers claim to be discovering music anew.

Reversing the sonatas chronological order, the disc opens with an account of the Violin Sonata from Isabelle Faust and Alexander Melnikov that balances forthright expression with exquisite fragility. At relatively steady but beautifully nuanced speeds Faust deploys a wonderful array of tone to reveal new layers of detail in this much loved work. From forte cascades to dusky fingerboard pianissimos, she is matchlessly partnered by Melnikov in a reading that you sense will stand the test of time just as much as the music itself.

In the Cello Sonata, Jean-Guihen Queyras is partnered by pianist Javier Perianes in a generous-spirited reading that embraces the musics nobility and pain, the subtle humour, and the fizzing energy of the final movement. Like Faust, Queyras has complete command of his instruments range of colours allied to a broad expressive sweep, so that once again the listener is introduced to new perspectives in this familiar work.

Tanguy de Williencourt is the pianist in the four late piano pieces which, woven between the sonatas, give the disc a pronounced elegiac tone. They range from the Berceuse heroïque composed for a multi-authored collection dedicated to Belgian King Albert I, complete with muted fanfares, and the sombre witness of the Élégie (which appeared in a volume dedicated to the British Queen Mother, Queen Alexandra), to two miniature pièces doccasion: a Page dalbum written in support of the work of Debussys wife with the Clothes for the Wounded organisation, and the immensely touching Soirs illuminées par lardeur du charbon, composed for Debussys coal merchant (and musical connoisseur) M. Tronquin to help secure a fuel supply in the harsh winter of 1916-17. All these pieces, the last tiny jewels in Debussys glorious output of piano music, reach far beyond their circumstances of origin in their power to move, and they are set out before the listener here with noble restraint and clarity.

This is a disc whose thoughtful programming adds up to much more than the sum of its already considerable parts, to create a remarkable sonic picture of Debussy in the harrowing but ultimately uplifting years of his life. In a year already rich in centenary tributes, this disc really does stand out from the crowd, with presentation and sound to match. In a series of recordings that are already becoming collectors items, this is something very special: do try to hear it!

Most striking of all is the enchanting triple sonata, whose harp-inflected musings appear to float free of musical gravity in this hypnotic account from Xavier de Maistre, Antoine Tamestit and Magali Mosnier. Four piano rarities played with beguiling sensitivity by Tanguy de Wlliencourt round out one of the most captivating releases of the Debussy centenary year.  Julian Haylock (Chamber Choice)
BBC Music Magazine Christmas 2018

The Sonata for flute, viola and harp sounds more than ever like a final, nostalgic evocation of the worlds of Faune and Bilitis here... Isabelle Faust and Alexander Melnikovs account of the Violin Sonata, Debussys last completed score, embraces exquisite fragility and strength in equal measure, the finale gathering itself for one last moment of assertion at the end. Jean-Guihen Queyras and Javier Perianess performance of the Cello Sonata, noble in manner and grand in scale, balances the austere grief of the opening movement with understated wit in the Sérénade and nervous energy in the finale. ... Tanguy de Williencourt, meanwhile, binds the disc together with the four piano pieces, played with admirable restraint and quiet, if unsparing intensity. Listen to it in a single sitting, and in the right playing order: its extraordinarily moving.  Tim Ashley
Gramophone November 2018