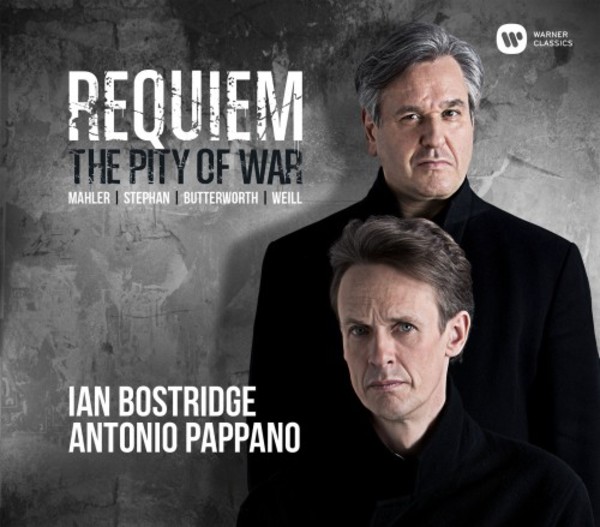 Requiem: The Pity of War

Marking the 100th anniversary of the end of World War I, Ian Bostridge and Antonio Pappano have assembled Requiem, a programme of songs offering historical and poetic perspectives on this momentous event. Composed over a period of some 50 years, the songs were written by Gustav Mahler, Kurt Weill and two creative musicians of promise and achievement whose lives were cut short by the Great War, the Englishman George Butterworth (1885-1916) and the German Rudi Stephan (1887-1915).

Bostridge and Antonio Pappano are on superb form here, carefully responsive to style and mood, yet striving throughout for unsparing immediacy of expression. Stephans taxing vocal lines push Bostridge to his limits in places, though the atmosphere of sensual introversion is finely sustained. A Shropshire Lad is all half-tones and hushed retrospection as the shadows gradually darken towards the finality of the closing song. ... A disc of great power and intelligence, its both haunting and undeniably strong.  Tim Ashley
Gramophone November 2018

Bostridge and Pappano revel in the folk-like Butterworth numbers and the heady Romanticism (recalling Strauss, even early Berg) of Stephan's cycle. ... Bostridge's distinctive, idiosyncratic style lends more than a hint of rage to Mahler and Weill's anti-miltaristic irony.  Hugh Canning (Album of the Week)
The Sunday Times 11 November 2018

Putting together a song recital to mark todays Armistice centenary is no easy task  few art songs came directly from the horrors of the trenches  but the work of two composers killed in the conflict, one English, one German, finds its way on to a moving new release from tenor Ian Bostridge, with the Royal Operas Antonio Pappano at the piano. George Butterworths settings of AE Housmans A Shropshire Lad are well known and welcome here, but not so familiar is Rudi Stephans startlingly sensuous Ich will dir singen ein Hohelied, a cycle of erotic love songs far more radical than Butterworths nostalgic pastoralism.  Stephen Pritchard

At the heart of the matter there's A Shropshire Lad by Butterworth, which is well balanced by some love songs by the even shorter-lived German soldier Rudi Stephan, killed in 1915. Thought-provoking and often memorable stuff.  David Mellor
The Mail on Sunday 11 November 2018