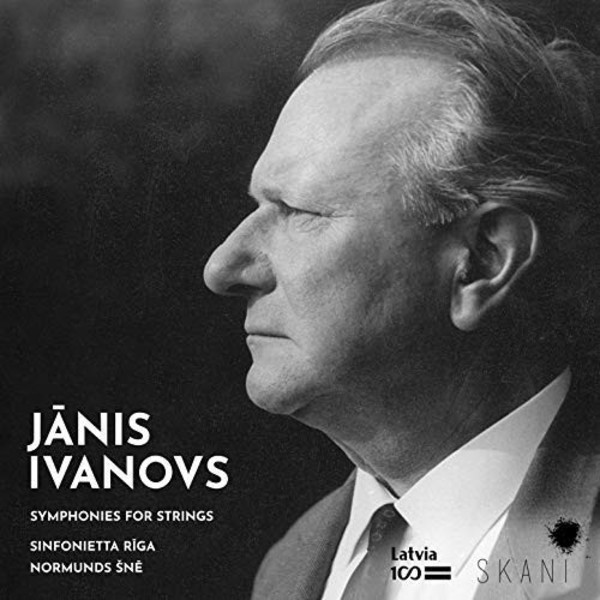 This album features three works by perhaps the greatest of Latvian symphonic composers of 20th century  Janis Ivanovs (1906-1983). All of them, Sinfonietta, Poema luttuoso and Symphony no.14 (also titled Sinfonia da camera), are original works for string orchestra and truly expressive in their nature.

Ivanovs always hungered to encounter genuine, hardened-by-life drama, even more so if it was enriched by the shadow of the past and demanded use of the imagination. Thus, he composed Poema luttuoso (1966), a poem of pain dedicated to the victims of Salaspils concentration camp.

Symphony no.14 (Sinfonia da camera, 1971) differs from Ivanovs typical symphony type in that it has only three parts, lacking the usual sonata-allegro. This work, commissioned by Latvian Philharmonic Chamber Orchestra and its long time conductor Tovy Lifshitz, served as a calling card of contemporary Latvian music to listeners from countries near and far during the 70s and 80s.

Sinfonietta (1977) is certainly dedicated to youth and young musicians, who today so gladly assemble in friendly music-making groups (cameratas) to confirm their ever-increasing skills and joy for music.

Sinfonietta Riga, founded in 2006 by Normunds nē is today one of the leading Baltic orchestras. Their performances together with Latvian Radio Choir have brought wide critical acclaim, including Grammy Award for their Adams Lament album by Arvo Pärt released on ECM. Sinfonietta Riga has recorded over ten other albums, released by Wergo, Ondine, Edition Records, Challenge Records and SKANI.
It is music born of the embrace and inspiration of a rich inner world. Music that addresses its time copiously and without compromise. The lightness of creation is not a priority, while the inner voice of truth is.   Normunds nē