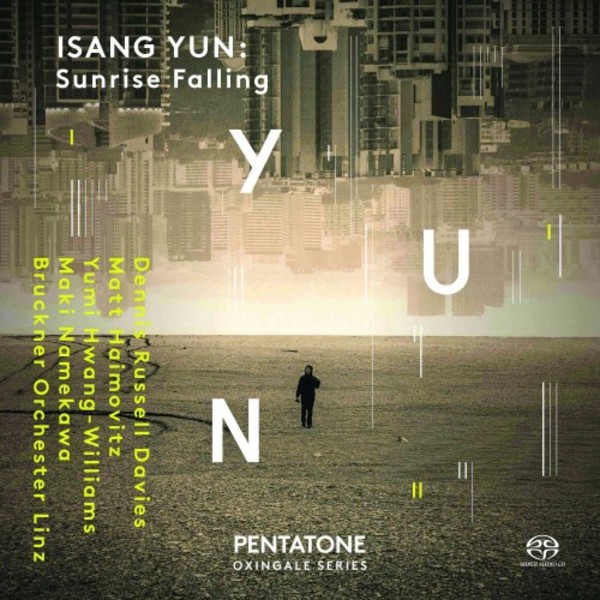 Uncompromising in his life as he was in his music, Korean composer Isang Yun (191795) held fast to his dream of a united Korea, even as he was unjustly accused of espionage for North Korea and sentenced to imprisonment and death. From a life of unimaginable oppression and torture emerges music of raw emotional power, heard on Iang Yun - Sunrise Falling, a centennial commemoration of Yuns life and music from the Pentatone Oxingale Series. Maestro Dennis Russell Davies, a longtime collaborator and advocate for Yun, curates the programme and conducts the Bruckner Orchestra Linz. A cellist himself, Yuns fascinating, highly autobiographical Concerto for Violoncello and Orchestra (1975/76) anchors the album. In a live performance, cellist Matt Haimovitz tackles the controlled chaos of Yuns score, bursting with passion, despair, and new timbral textures, such as the use of a plectrum to emulate the Korean zither, the kŏmungo. Yuns Concerto for Violin and Orchestra no.1 (1981) features violinist Yumi Hwang-Williams, who reflects upon her own emotional return to Korea in 2015, where she performed the work at a festival in honour of Yun. The double album also includes the orchestral Fanfare and Memorial, and additional illuminating solo works by Yun performed by pianist Maki Namekawa, Hwang-Williams, and Haimovitz. 100 years after Isang Yuns birth, the two Koreas still teeter on a razors edge, with ever more global ramifications. His music opens the gate to a lost, united land, with Yuns own heart bleeding but ever hopeful.

This two-disc set showcases the unjustifiably little-known composer (1917-95), born in what is now South Korea, whose passion for reunification had harrowing consequences. That adjective is rightly applied to the slow movement of the 1976 Cello Concerto by its fine performer.
The Sunday Times 11 November 2018