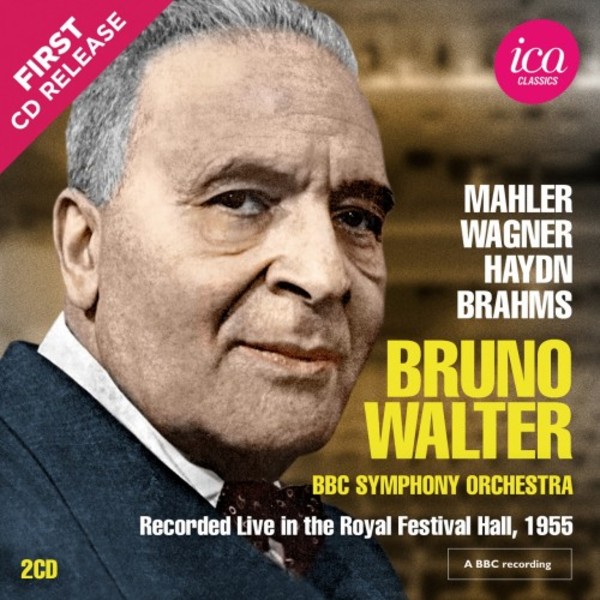 » no.9 Wo die schonen Trompeten blasen
Symphony no.1 in D major 'Titan'

» no.9 Wo die schonen Trompeten blasen
Symphony no.1 in D major 'Titan'

Bruno Walters (1876-1962) appearance in 1955 with the BBCSO formed part of the BBCs May Festival, an annual event which looked back to the pre-war London Music Festival. The present recordings have never been previously issued and serve to illustrate his genius  he showed no diminution of his powers on the podium despite celebrating his 80th birthday the following year.

Walter made a studio recording of Wagners Faust Overture in 1923 and a broadcast recording with the NBC in 1939. This 1955 Royal Festival Hall broadcast has superb sound and a great sense of forward movement and excitement. It has never been released before.

Haydns Symphony no.96 was a great favourite, Walter recording it twice  in 1937 with the VPO and in 1954 with the New York PO. There are also two broadcasts, again with the NYPO in 1954 and with the ORTF in Paris in 1955. This Royal Festival Hall account has never been released before and is here performed with a distinctly Viennese geniality.

Brahmss Song of Destiny (Schicksalslied) was another work close to Walters heart which he recorded in 1941 with the New York PO and then again in 1960 with the Columbia SO in Los Angeles, the day after his last public concert. Walter was able to balance the autumnal character of much of Brahmss music with considerable vigour. This live performance from the Royal Festival Hall has never been released before.

Walters close working relationship with Gustav Mahler is legendary. To date, various live performances of Mahlers Symphony no.1, not to mention two studio accounts in 1954 and 1961, have appeared. The London broadcast performance of 1955 and Walters account of Wo die schönen Trompeten blasen from Des Knaben Wunderhorn with the great soprano Irmgard Seefried bear testimony to his genius as a Mahler conductor. Both performances have never been issued before.

This release has been sourced from the Richard Itter archive of live recordings. The collection is very important for collectors because it has never been released before onto the market. Following the archives launch in October 2017 with releases featuring Beecham, Böhm, Cantelli, Karajan, du Pré, Klemperer and Rostropovich, it has received universal praise from both the classical media and record collectors for the excellent sound and performances.
Mono recordings