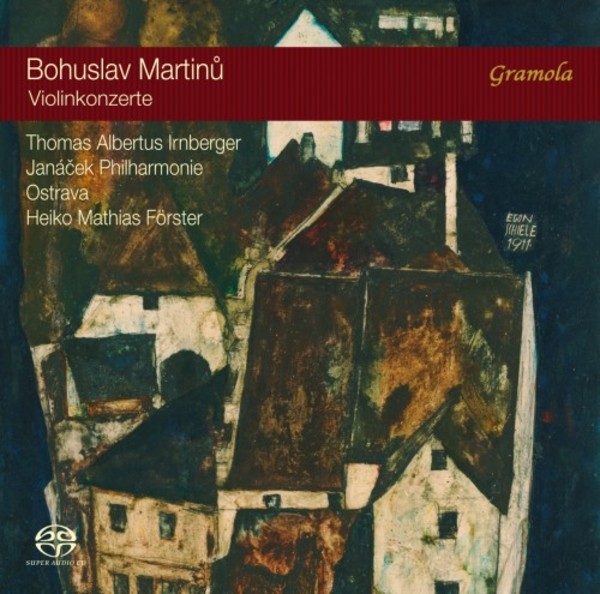 Following up on his recordings of the Concerto for Violin, Piano and Orchestra by Bohuslav Martinu (Gramola 99098), internationally-acclaimed violinist Thomas Albertus Irnberger presents both Violin Concertos of the Czech composer, who so often has to give room to the greater popularity of his compatriots Smetana, Dvorak and Janacek. Martinus Violin Concerto no.1 H226 was written in 1931, during his almost 20 years lasting residence in Paris, France. In 1941, Martinu emigrated via Lisbon to the United States because of his detestation of fascism and war and the fear of political persecution, where he soon (1943) composed his Violin Concerto no.2 H293. Irnberger receives top-class accompaniment from the Janacek Philharmonic Ostrava, which, under the direction of Heiko Mathias Förster, knows how to translate the Czech gesture of these works into a melodious manner.

Thomas Albertus Irnberger, who was born in Salzburg in 1985, is among Austrias leading violinists. The German specialist press wrote: like hardly any other young artist in his field, in recent years Irnberger has secured himself a leading position amongst Europes violinist elite.

At the age of 15 in the Palais des Beaux Arts in Brussels he celebrated a debut that attracted widespread attention as the soloist in Tchaikovskys Violin Concerto. Since then Thomas Albertus Irnberger has performed as a soloist and chamber musician in major concert halls in Europe, Israel and in Asia, and has been invited to renowned international music festivals.

His recordings have regularly been the recipients of prizes and top rankings from the international press. Since 2008 Thomas Albertus Irnberger has devoted himself to research into and the rediscovery of ostracised composers, and in Israel he played the first performance of the violin concerto by Hans Gál.

Goldmark - Suite no.2 for Violin & Piano, Piano Trio no.1