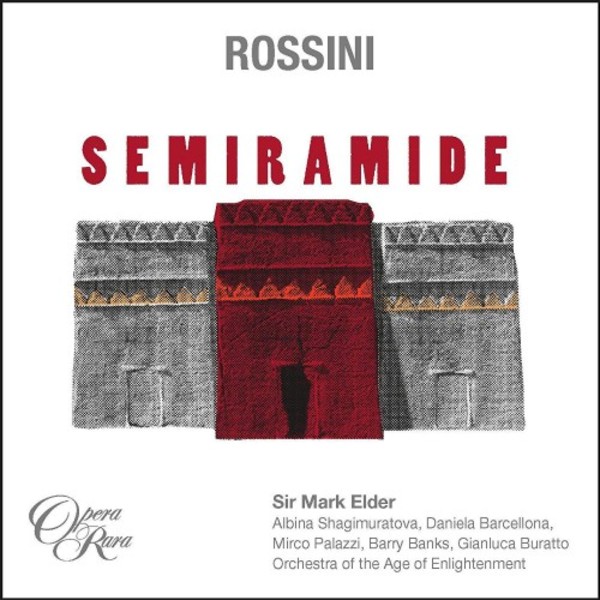 A complete studio recording of Rossinis last and one of his greatest Italian operas, Opera Raras Semiramide, starring Albina Shagimuratova and Daniela Barcellona, conducted by Sir Mark Elder, includes all of the passages traditionally cut in modern revivals and makes this dramatic masterpiece speak in a new way to todays opera audience.

An immediate success at its première in 1823 at Venices Teatro La Fenice, Semiramide was kept in the public consciousness through much of the 19th century by leading sopranos of the day such as Adelina Patti and Nellie Melba  singers who thrived on tackling the challenging part of the Queen of Babylon. Rossini wrote some of his most demanding vocal music for the title role, which he created for his wife Isabella Colbran. The opera was also at the forefront of the revival of Rossinis serious operas in the 1960s and 1970s, during which time the famous Decca recording featuring Joan Sutherland as Semiramide and Marilyn Horne as Arsace was released.

Fifty years on, Opera Rara has tried to make the opera speak in a different way by recording the work without any of the cuts that have accompanied almost all modern revivals, and by using historical instruments. This will also be the first studio recording of the opera for over twenty years.

The studio recording of Semiramide was immediately followed by a concert performance on 4 September 2016 the BBC Proms which received raving reviews in the press.

Thrilling, every second of it  The Guardian

Conductor Mark Elder was the evenings hero. From the menacingly urgent crescendo that launches the Overture, he took every note of the opera seriously, whipping the Orchestra of the Age of Enlightenment on like a champion jockey to produce a sound that was grainy, pungent and forceful  The Telegraph

The Opera Rara Chorus sings some tough music thrillingly well. Moreover, passages that might sag in a modern-instrument reading gain immensely from the colour, transparency and texture afforded by the OAEs period instruments. ... The principals are outstanding, gelling as an ensemble rather than merely being a parade of soloists. ... This is another benchmark recording from Sir Mark Elder and Opera Rara.  Erica Jeal (Recording of the Month)
BBC Music Magazine December 2018

... let it be said that the new Semiramide, the lavishly gifted Russian coloratura Albina Shagimuratova, she of the shining high E, and Daniela Barcellona, our finest contemporary Arsace, are both superb. Serbami ognor is sublime but go to Ebbene, a te, ferisci, Semiramides echo of the closet scene in Hamlet and as difficult a duet as any in Italian opera, and you will realise just how good they really are. ... And what a difference the old instruments make. It will be difficult to hear Semiramide again without the melancholy beauty of the period horns and bassoons, the hieratic splendour of the brass, the distinctive timbres of the solo winds, clear as a May morning, or the rasp and sinister atmospheric charge of the lower strings.  Richard Osborne (Recording of the Month)
Gramophone Awards 2018