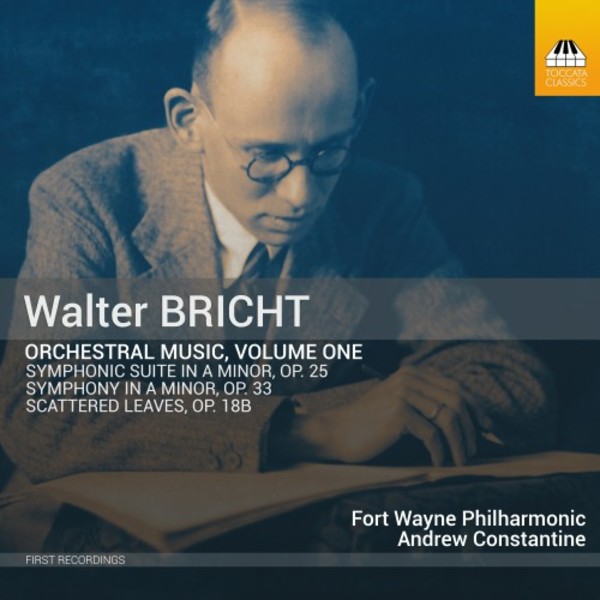 The Austrian composer Walter Bricht (190470) was one of many musicians of Jewish ancestry who fled Vienna after the Anschluss for the safety of the USA, becoming a valued professor at Indiana University in Bloomington. Fittingly, it is the nearby Fort Wayne Philharmonic that has made the first album of Brichts music. The recording reveals another major  and echt Viennese  voice and pointing to yet another potentially important career cut off in the bud by the Nazis. Bricht was reportedly Franz Schmidts favourite student, and the late-Romantic styles of the two men are indeed very closely aligned in their mix of Baroque counterpoint, Classical procedure and Wagnerian chromatic harmony: Brichts Symphony in A minor might almost be Schmidts No.5.

The British conductor Andrew Constantine currently serves as Music Director of both the Fort Wayne Philharmonic and Reading Symphony Orchestra in the USA. He began his conducting career in Leicester with the Bardi Orchestra and was later awarded an Honorary Doctorate of Music by the University of Leicester for his services to music. After winning the first Donatella Flick Conducting Competition in 1991, he studied at the Leningrad State Conservatoire with the legendary teacher Ilya Musin. The Fort Wayne Philharmonic Orchestra traces its origins to the Verweire Symphony Orchestra, founded in January 1924 by the conductor John L. Verweire. In June 2009, the Philharmonic announced Andrew Constantine as its seventh Music Director, and he assumed full-time duties with the 201011 Season. Now, under his leadership, the Fort Wayne Philharmonic is taking another major step forward: this album of music by Walter Bricht is its first commercial recording.