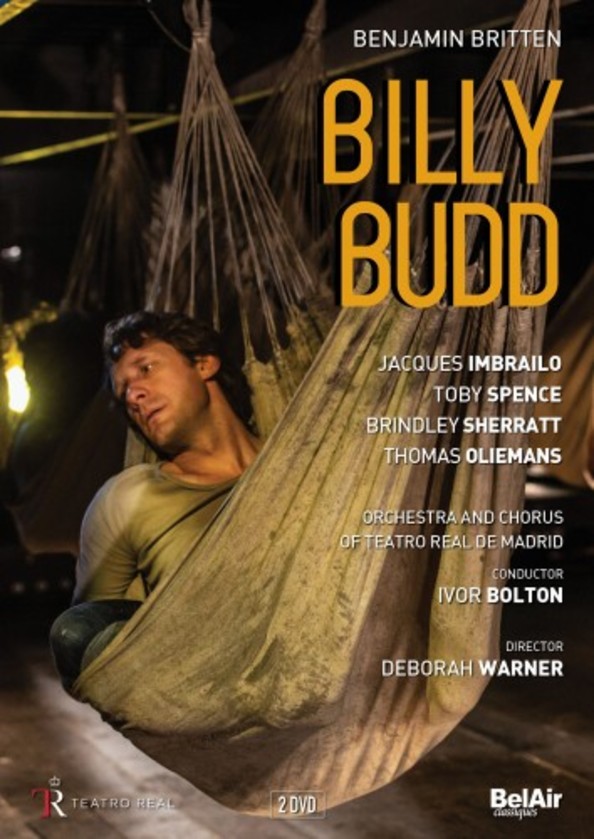 800 litres of water, two sails, thirty pulleys, sixty hammocks: for the bicentenary of the Teatro Real of Madrid, Deborah Warner coined a colossal production of Benjamin Brittens Billy Budd. A critically-acclaimed performance, praised for its depth and intelligence, and finally available on DVD & Blu-ray!

Oh, what have I done? Captain Edward Fairfax Vere, former commander of the H.M.S. Indomitable asks himself with horror at the beginning of the opera, before recounting the tragic events that took place aboard his ship in 1797. The story revolves around a young model sailor, Billy Budd, and John Claggart, the unscrupulous master-at-arms obsessed and crazed by Billys angelic beauty; and follows the characters in their fall down to the most infernal depths of perversion and psychosis, exploring the themes of innocence, culpability, individual responsibility and justice. In this ambiguous and symbolic tale, drawn from Herman Melvilles last masterpiece, the composer Benjamin Britten, who returns for the occasion to symphonic opera and its infinite possibilities, unsettles and disturbs us by revealing the complexity and universality of human experience.
Far from writing the characters as allegories of Good and Evil, the opera shows us instead the remorseless logic followed by the surge of ones darkest desires. But in this opera dominated by masculinity, Deborah Warner goes beyond the story of violence, jealousy and hatred and chooses to focus instead on the collateral beauty produced by comradeship, friendship and forgiveness Tenor Jacques Imbrailo, who knows the title role perfectly, delivers a stunning rendition of the young sailors part, while British singers Toby Spence and Brindley Sherratt provide solid interpretations of Captain Starry Vere and of John Claggart. In the pit, Ivor Bolton masterfully deploys, along with the Orchestra of the Teatro Real, all the energy and power of Brittens fifth opera. A now iconic production, co-produced by the Opera of Rome and the Royal Opera House.
British director Deborah Warner has created what might be the Billy Budd of the next decade, an instant classic  bachtrack.com (5 stars)

The casting, mostly British, of Billy Budd was uniformly top notch, evidently fulfilling the needs and wishes of the production.  operatoday.com

Recorded in HD at the Teatro Real, Madrid in 02/2017
Directed for TV by Jérémie Cuvillier

Britten - The Rape of Lucretia (DVD)