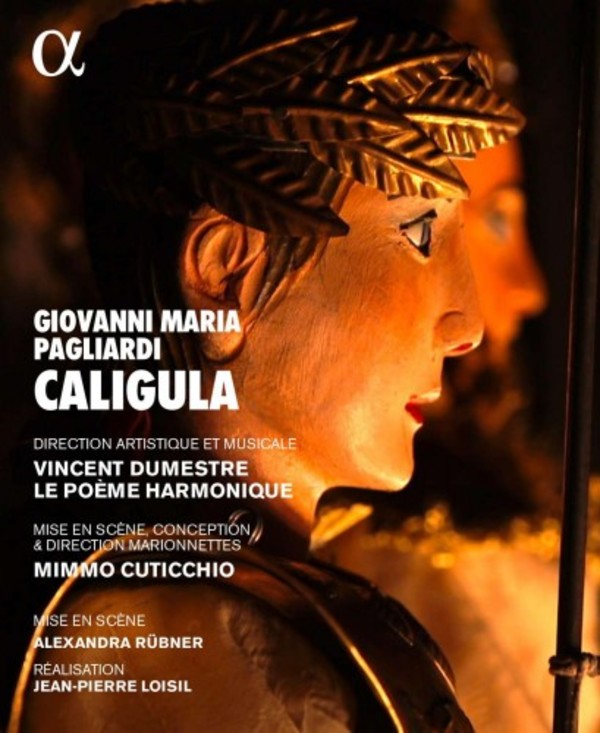 From Suetonius to Camus, Caligula has constantly inspired historians, poets and playwrights, to the point of becoming a myth: that of madness steeped in cruelty ... Caligula raves, Caligula is crazed, but his gaze is that of the visionary, his derangement of the senses is an opening towards the fantastical. Now it is precisely that fantastical (and also comical) dimension that is inscribed in the fable set to music Giovanni Pagliardi in Venice in 1672, which Vincent Dumestre brings back to life here. But above all, this portrait of Caligula as a hero of the impossible, a showman of wonders, has been rounded off with an idea that suddenly seems self-evident: Caligula, and all the characters around him, could only be wooden actors, puppets.

(...) The traditional Palermitan pupo  used in the famous puppet shows  is manipulated in full view of the audience by means of iron rods fixed to the head of the wooden character and one of the arms of the pupo, especially for the fight scenes, while the other arm is connected by a thread. The specific genius of the pupi is not mimetic, as in Venice, but poetic. Or, even better: epic ... There is only one surviving representative of this popular art backed up by learned culture: Mimmo Cuticchio. Born in 1948, he learnt his skills from his father Giacomo, through practical experience of performances both itinerant, going from village to village, and local, in Palermo.
 Alexandra Rübner and Vincent Dumestre (from the booklet article)

Caligula delirante (Venice, 1672) concerns the crazed and dangerous misbehaviour of Caligula, whose attraction to the beautiful widow Teosena (queen of Mauritania) sparks the fury of the empress Cesonia, who plots revenge by giving him a magical potion that will cause him to detest her rival. ... The ironic treatment of ancient Roman folly and amorality is like a stepping stone between Monteverdi's Poppea (1643) and Handel's Agrippina (1709). ... [the] production... represents the action using the traditional Sicilian craft of half-life-size wooden marionettes operated by iron rods. The crew onstage and real-life singers positioned at the sides are visible but dressed in black, their lit faces showing obvious affinity for how the drama is being portrayed; the seven-strong band of Le Poeme Harmonique are seated in the foreground in a circle. The collective result is charming and clever  it must have been a beguiling experience in the flesh.  David Vickers
BBC Music Magazine January 2019

Those who enjoy early opera should not miss this delightful issue, well filmed and well presented by Alpha.
MusicWeb International