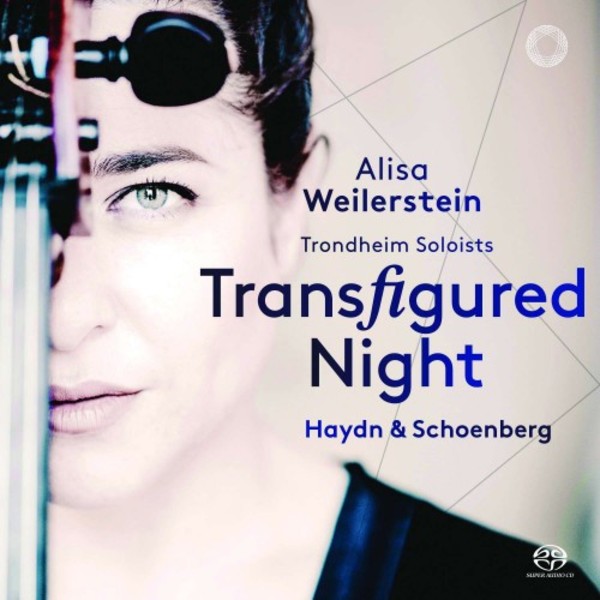 Transfigured Night brings together two outstanding composers associated with Vienna: Joseph Haydn and Arnold Schoenberg. The former is often seen as the oldest representative of the First Viennese School, whereas the latter founded the Second Viennese School, using the classicism of his predecessors to explore new, atonal musical paths into the twentieth century. By combining Haydns two cello concertos (in C major and D major) and Schoenbergs symphonic poem Verklärte Nacht  in the 1943 edition for string orchestra  this album sheds a new, fascinating light on both Viennese masters.

The connection between the stylistically contrasting pieces on this album is further enhanced by the inspired playing of American cellist Alisa Weilerstein and the Trondheim Soloists. For Weilerstein, this album is not only a fascinating exploration of the rich Viennese musical heritage, but just as much a confrontation with the dark history of a city her grandparents had to flee in 1938. Transfigured Night is Weilersteins first album as an exclusive Pentatone artist, as well as the first album recorded with the Trondheim Soloists since her appointment as Artistic Partner of the ensemble in 2017.

With a title like Transfigured Night, you might expect cellist Alisa Weilersteins debut album for Pentatone (she has recently jumped ship from Decca) to focus on the fin-de-siècle world of the Second Viennese School. But while Schoenbergs eponymous string sextet Verklärte Nacht (which in turn took its title from a poem by Richard Dehmel) does indeed feature prominently, the programming is much more intriguing. She couples this landmark from the founder of the Second Viennese School with a pair of cello concertos by the senior member of the First, Joseph Haydn.

This ingenious coupling throws up some fascinating contrasts: between the first flowering of Viennese Classicism (Haydn), and the post-Tristan stretching of late-Romantic tonality to its limits (Verklärte Nacht); between the Eisenstadt/Eszterháza-based outsider later embraced by the Austrian capital with open arms, and the Viennese native forced by the advent of Nazism into permanent US exile. (Weilerstein writes with moving restraint of her own familys flight from Nazi Vienna in 1938, just a few years after Schoenbergs departure.) Yet what links the two composers is just as fascinating: a fundamental preoccupation with the use of small motifs as a way of developing large-scale musical structures. The cheerful courtliness of Haydn may seem a long way from Schoenbergs intense proto-Expressionism, but there is more to link these two great musical pioneers than immediately meets the ear.

As for the performances themselves, they combine Weilersteins immaculate technique and dazzling virtuosity with a deeply thoughtful musicality, the cellist finding perfect partners in the excellent, youthful Trondheim Soloists. With a string force of around 6/5/4/3/2 plus pairs of oboes and horns, the Haydn concertos manage to strike a nice balance between intimacy and fullness of tone. These are stylish but full-blooded accounts, an approach that might be thought to suit better the later D major Concerto (once thought to be the work of Anton Kraft), but which also pays unexpected dividends in the earlier C major work (rediscovered in Prague in 1961, two centuries after it was first composed).

Outer movements are crisp, alert, rhythmically buoyant and, in the finales, urgently driven. But listen beyond the brilliant surfaces and you will discover slow movements that, in both works, approach a level of almost vocal expressiveness that is rare outside of Mozart. There are some spectacular cadenzas from Weilerstein (who directs from the soloists podium), while the solo octaves and hectic string crossing in the playful finale of the D major work are tackled with a mixture of glee and abandon. Its the C majors finale, however, that is the real cracker, the Trondheim players matching Weilerstein in virtuosity as the music races along thrillingly. This is classy playing, and ideal for those who dont insist on a wholesale jettisoning of vibrato in this repertoire.

Virtuosity of a different type is on display in Verklärte Nacht: from the marvellously hushed opening, Schoenbergs every slightest marking, from dynamic swellings to elastic tempo modifications, is acutely observed by the musicians, so that you could almost reconstruct the score in all its detail just by listening to the recording. Yet far from feeling fussy, this results in a performance of extraordinary immediacy and focus, Dehmels woodland encounter springing vividly to life, as if in a particularly tangible dream. Here in particular, the size of forces strikes the listener as ideal: small enough to create a chamber-like feel without the inevitable limitations of the works original solo scoring, but large enough to bring richness and depth without the overweening opulence and loss of focus that often mars larger-scale accounts.

Above all, its the range of colours and the resulting depth of expression that marks this performance as something really special. From the weightiest fortissimo to the tenderest pianissimo, you get the impression that the musicians arent just playing but actually feeling this music, leaving you wondering  while being swept along by the expressive tide  how such a tonal and emotional kaleidoscope could be conjured up by what is, after all, just a string orchestra. By the end, there really is a sense of transcendence and transfiguration, a magical ending to a wonderful disc.

Apart from Alisa Weilersteins own personal note, there are some exceptionally intelligent booklet notes by Mark Berry, and (most helpfully) the full text of Dehmels poem. The recording, made in Trondheims Selbu Kirke after a period of intensive rehearsals, is in Pentatones usual demonstration class. Top marks all round!

Weilerstein breezes through the Haydn with deft support from the ensemble ... Schoenbergs five-part melodrama... is in itself a tour-de-force of musical storytelling by the performers. Light, shade and, in the Grave, a kind of cinematic intensity and dark romance youd otherwise expect in a Hitchcock thriller.  Michael Beek
BBC Music Magazine October 2018

Youd go far to find performances of the Haydn concertos that match Alisa Weilersteins mix of stylistic sensitivity, verve and spontaneous delight in discovery. ... Its also my kind of Schoenberg. Performing his 1899 tone poem with a hyper-responsive group of some 20 players, with Weilerstein now leading the cellos, allows you to combine the advantages of both the original sextet version and Schoenbergs later transcription for string orchestra. ... for a performance that combines chamber-musical intimacy, transparency of detail and urgent human expressiveness, you wont do better than this.  Richard Wigmore
Gramophone October 2018

captures each shift of colour
The Guardian 30 August 2018

Faced with the Trondheim Soloists gutsy fervour as they beaver through the late romantic paroxysms in the string orchestra version of Schoenbergs Verklärte Nacht, a casual listener might wonder: What do they put in the water in Trondheim? How come the musicians have such zing? Well, the players are young, which always helps, but aside from the water, or the Norwegian air, another reason must be the galvanising presence of the always exciting American cellist Alisa Weilerstein, the ensembles new artistic partner.  Geoff Brown
The Times 24 August 2018