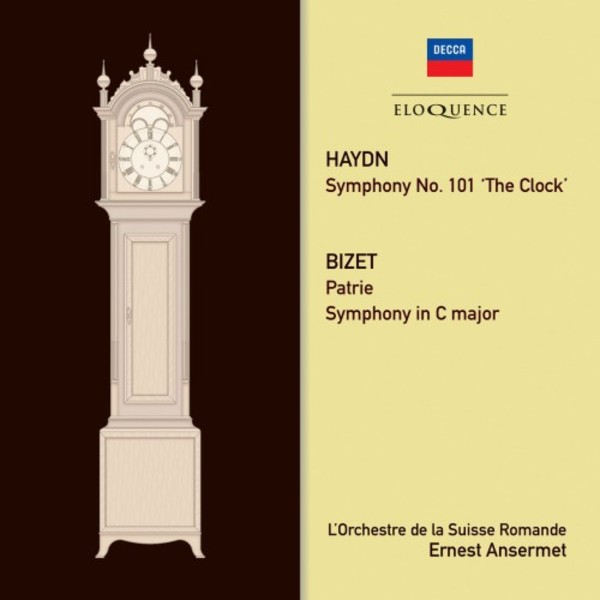 Ansermets invigorating and unsentimental way with Haydn has been documented on Eloquence with reissues of the Paris Symphonies (4801942) and the Symphonies Nos. 22 and 90 (4800378).

What Ansermet loved about Haydn above all was his ability to express afresh every time, in so satisfying and charming a way, his moral health and optimism. In the course of his analysis, Ansermet also admires a heartfelt simplicity... a richness and a purity that give his work its personal, never-changing character. No.101, the Clock finds him in his element, taking a noble and unsentimental approach to the symphonys introduction before launching its main argument with the kind of rhythmically taut elan that distinguishes his many recordings of Ravel and Stravinsky.

Made on 11 July 1949 in the famously sympathetic acoustic of the Victoria Hall in Geneva, the recording was both Ansermets first Haydn on record and his last recording on 78rpm. When issued on the brand-new LP format in May 1950, the recording caused a stir in the pages of Gramophone, prompting a long letter from an excited reader: I have never heard such reproduction on discs  not ever. The Haydn is incredibly pure.

The spirit of Haydn was reborn in the astonishingly fresh and accomplished Symphony composed by Georges Bizet as a 17-year-old student in Paris: a masterpiece of succinctness and joie de vivre, with writing of dazzling quality and a wonderful melodic sense. The work inspired great affection in Ansermet who recorded it twice. The 1961 account has already been reissued by Eloquence as part of the conductors complete stereo recordings of Bizet (480 0457).

Dating from March 1953, the earlier mono version is scarcely less vivid thanks to both the Decca engineering team (led by Peter Andry) and Ansermets acute ear for instrumental balance. Its original companion on disc was the rarely heard Patrie Overture, recorded just 18 months later and originally issued in mono; with this newly remastered release the pioneering efforts of Deccas stereo team can be enjoyed.

I like the subdued tone Ansermet secures at the start of the gay finale; and... the playing is first class.  Gramophone, May 1950 (Haydn)

There are few more delightful symphonies in the repertoire... and there are few, if any, more felicitous disc performances of it than this one... The playing throughout is exceptionally crisp ... Ansermet gives the end sections [of Patrie] the grand treatment, while bringing contrasting intimacy to the lyrical middle part.  High Fidelity, May 1963 (Bizet)