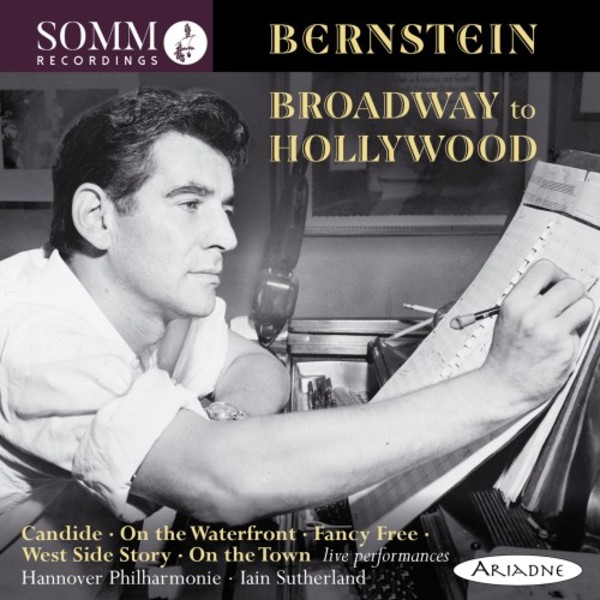 » no.1 Dance of the Great Lover
» no.2 Pas de deux (Lonely Town)
On the Waterfront: Symphonic Suite
West Side Story: Symphonic Dances

» no.1 Dance of the Great Lover
» no.2 Pas de deux (Lonely Town)
On the Waterfront: Symphonic Suite
West Side Story: Symphonic Dances

SOMM Recordings celebrates the centenary of Leonard Bernsteins birth in style with a remarkable 1993 live broadcast recording  never before issued and newly mastered for CD  with the Hannover Philharmonie conducted by Iain Sutherland.

Five of Bernsteins era-defining works for Broadway and Hollywood revel in his inexhaustible gift for memorable melodies, his vivid sense of drama, infectious playfulness and captivating sense of poetry.

The effervescent Overture to Bernsteins 1956 re-telling of Voltaires Candide has long been a concert hall favourite. Brilliant, uplifting and thrillingly orchestrated, it brims with memorable tunes threaded together with masterful aplomb.

The Symphonic Suite drawn from his score for Elia Kazans Oscar-laden 1954 film On the Waterfront is a heavyweight exercise in evocative and atmospheric music, its muscle and menace transformed into a final, redemptive hymn to individual freedom.

On the Town pays tribute to the city that never sleeps in an exuberant tale of three sailors finding love on 24-hour shore-leave in New York. Its Two Dance Episodes borrow themes from Fancy Free (on which it was based) to exhilarating effect.

Bernsteins theatre masterpiece West Side Story transformed the American musical overnight in 1957. With its great trajectory from C major to E flat and back again, it carries itself with operatic immediacy. The Symphonic Dances drawn from the score exalt in the power of an orchestra in full, forceful flow.

Robert Matthew-Walker, author of Broadway to Hollywood: the Musical and the Cinema, provides insightful booklet notes that illuminate Bernstein the man, the composer and his wonderfully inimitable music.