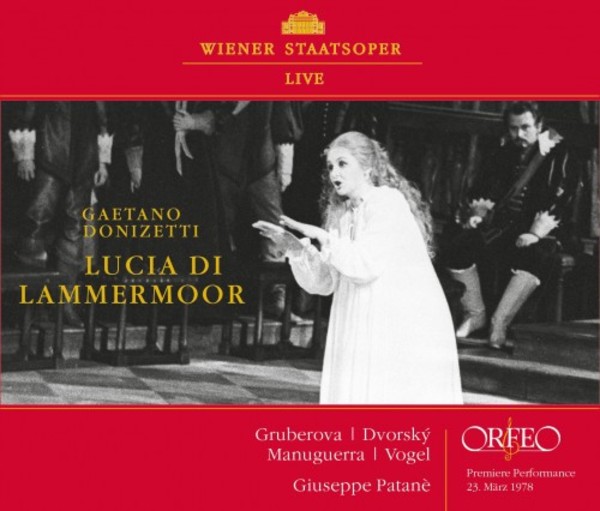 The global careers of not one but two Slovakian singers were launched on 23 March 1978 in Viennas State Opera: that of then-27-year-old tenor Peter Dvorský, and above all that of 31-year-old Edita Gruberova, hers a career which has endured to this day. Despite her success there in the role of Zerbinetta just eighteen months earlier, she was then still an insider tip for such a large bel canto role. Although studio recordings from subsequent years (1984, 1992 and 2003) exist of this role which would later become Gruberovas hallmark  one she sang eighty-eight times in Vienna alone  this early live recording has a quality that is missing from later recordings: the maidenly determination and yet stupendous vocal perfection (including her flawless high E flat) that Gruberova delivers in her portrayal, her inimitable sonorous timbre  which she retains to this day  alongside the wonderfully intimate and yet tense partnership with Dvorský, whose passionate, burning tenor provides a unique highlight in his first duet with Gruberovas Lucia and supplies a further high point in the tricky final scene on a recording not short of such brilliant climaxes. Matteo Manuguerras reading of Lucias brother Enrico is a perilously relentless, masculine tour de force. Last but not least, the quickening touch of Giuseppe Patanès baton makes this a gem among the treasures of Edita Gruberovas discography, one never short of outstanding testimony to her consummate vocal skill and is a wonderful addition to that of Peter Dvorský, whose discography is sadly not so bountiful. The Neapolitan conductor, who was highly regarded in Munich for his performances of Italian repertoire, transforms a singing festival into an exciting music drama in the way that he leads the Vienna Philharmonic in a highly flexible and dynamic manner through the musical narrative.
Cast:
- Enrico, Lord Henry Ashton: Matteo Manuguerra
- Lucia: Edita Gruberova
- Edgardo, Sir Edgar Ravenswood: Peter Dvorský
- Arturo, Lord Arthur Bucklaw: Thomas Moser
- Raimondo Bidebent: Siegfried Vogel
- Alisa: Czeslawa Slania
- Normanno: Christopher Doig