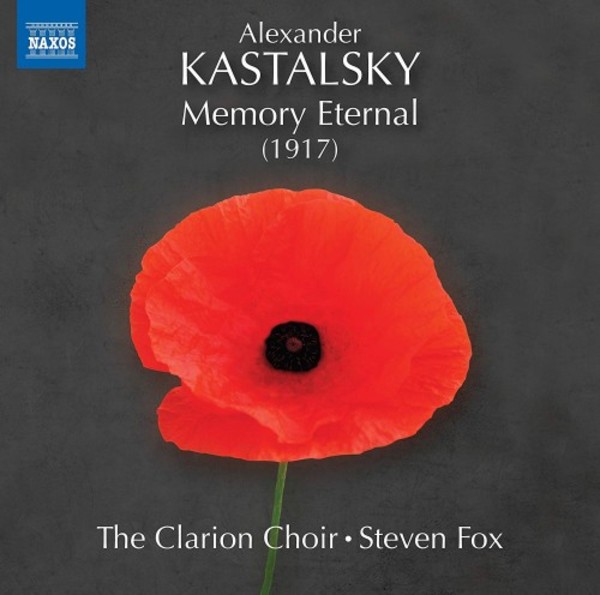 In the face of the devastation wrought by the First World War, Alexander Kastalsky conceived a musical service of remembrance for the fallen. A pivotal figure in Russian musical life  he was a student of Tchaikovsky and acclaimed as the founder of a new, national church music  Kastalsky composed a choral-orchestral Requiem, for the concert stage. Simultaneously, he worked on the a cappella version heard on this recording to be sung in Russian Orthodox churches. Following the basic structure of the Orthodox Panihida, or memorial service, Memory Eternal, and the short sacred pieces that end the programme, reveal Kastalsky's masterful use of choral sonority and colour, his weaving of complex polyphonic textures, and his graceful use of ancient chant melodies.

Kastalsky had a huge influence on younger Russian composers of choral music  not least Rachmaninov, whose own Vespers should be promoted (8555908)  as well as Gretchaninov (his Symphonies are on 8555410), Tcherepnin (theres an extensive series of piano miniatures on Grand Piano) and many others.

The Clarion Choir was formed in 2006 in New York and has performed on some of the greatest stages in the United States, Canada and Europe. The group made their Lincoln Center debut in 2011 at the White Light Festival. The group was featured on PBS in 2014, and their debut recording, Passion Week by Maximilian Steinberg, received several international honours. In October 2016, the choir premiered this same work in St Petersburg, where it was written in 1923, and in London. Memory Eternal is The Clarion Choirs second recording.

Steven Fox and the Clarion Choir are fast earning renown in the music of Eastern Orthodox tradition. Their recording of Maximilian Steinbergs Passion Week (8573665) has been a huge success  a Grammy Award nominee, BBC Music Magazine Awards nominee, American Record Guide Critics Choice, etc.. BBC Music Magazine wrote that it was: Performed here with breathtaking sensitivity by an outstanding New York-based choir, it emerges as a work of equal stature to Rachmaninovs justly acclaimed Vespers. A wonderful discovery.

The Clarion Choir, under the sure direction of Steven Fox, turn in a thrilling performance, recorded with clarity and not too much resonance in St Jean Baptiste Church in New York. This recording (together with its publication by Musica Russica) represents the rehabilitation of a major work, which nobody interested in Russian music of the 20th century should miss.  Ivan Moody
Gramophone October 2018

Blessed Art Thou among Women