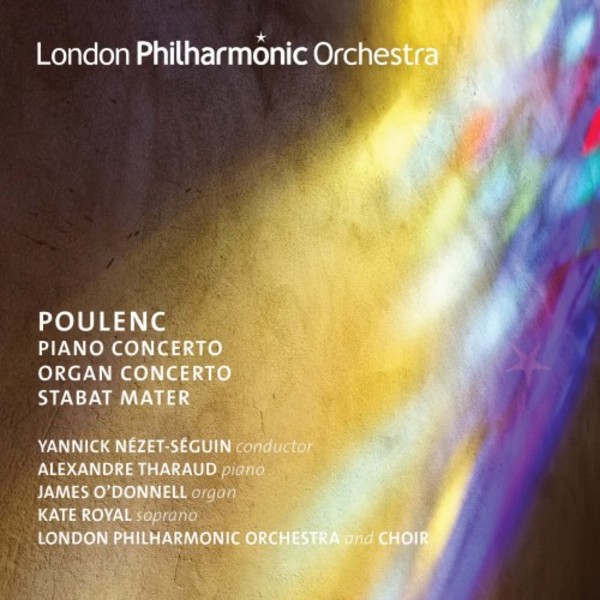 This release is the sixth on the LPO label conducted by Yannick Nézet-Séguin. The performances on this disc, recorded in 2013 and 2014, were part of his final season as Principal Guest Conductor.
The Organ Concerto was performed by James ODonnell as part of the Pull Out All The Stops festival, celebrating the restoration of the Royal Festival Hall organ, which had been out of use since 2005.
These performances were very well reviewed at the time: Yannick Nézet-Séguin is a master-painter and drew a rich spectrum of colours from the London Philharmonic Orchestra to decorate each of these scores in a distinctive way (Bachtrack); Yannick Nézet-Séguin [was] alive to the solemn and dramatic aspects of Poulencs setting, its radiance, jauntiness, pealing vitality and ritual dance (Classical Source).
The disc features performances from star soloists: organist James ODonnell; soprano Kate Royal; pianist Alexandre Tharaud. The Times said of the Organ Concerto under the meticulous direction of Yannick Nézet-Séguin, the London Philharmonic Orchestras strings formed a pale gold halo around the organ as James ODonnell navigated the crazy-mirror harmonies of Poulencs concerto with brisk, unflappable agility.
This release adds to an extensive collection of choral works on the LPO label, performed by the London Philharmonic Choir. Classical Source described the performance of Poulencs Stabat Mater as splendid, singing with strength, sensitivity and devotion.
Recorded live at Southbank Centres Royal Festival Hall, London, on 23 October 2013 (Piano Concerto and Stabat Mater) and 26 March 2014 (Organ Concerto).