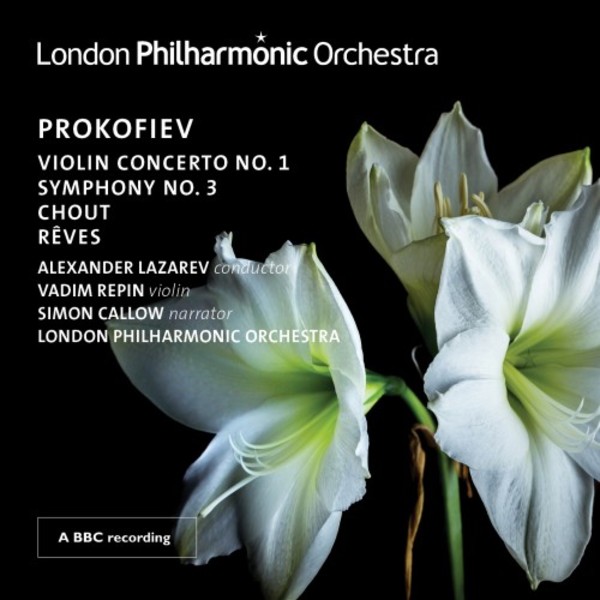 This is the first solely Prokofiev release on the LPO label. Until now only excerpts from the Chout Suite have been available (LPO-1010, Vladimir Jurowski 10 Years box set).
This is the also first chance to hear renowned virtuoso violinist Vadim Repin on the LPO label. Repin won his first competition at the age of five, and at 17, he was the youngest ever winner of the prestigious Queen Elisabeth Competition. This is Repins first commercial release of the First Violin Concerto.
This performance of Chout is narrated in English by stage and screen legend Simon Callow. Callow brings to life the story of a buffoon who, through many tricks and deceptions, outwits seven other buffoons. This release includes the full score of the 1921 ballet Chout. The full ballet is rarely performed and has only been recorded a handful of times in its history, with the first ever recording in 1985.
Alexander Lazarev has been praised for his interpretations of Prokofiev. David Nice notes his refreshing emotional directness, and The Scotsman said that his performance swaggered with con dence and fizzed with electricity.
These discs highlight Prokofiev as a master storyteller, from youthful melodies and memories of Russia in Rêves and the First Violin Concerto to Chout and the Third Symphony, which is built on themes from Prokofievs dark and dramatic much neglected opera The Fiery Angel. The opera was never performed during Prokofievs life, and has been staged very few times since.
Recorded live at Southbank Centres Royal Festival Hall, London, on 28 November 1997 (Violin Concerto no.1, Chout and Rêves) and 30 November 1997 (Symphony no.3).

Prokofiev - Betrothal in a Monastery