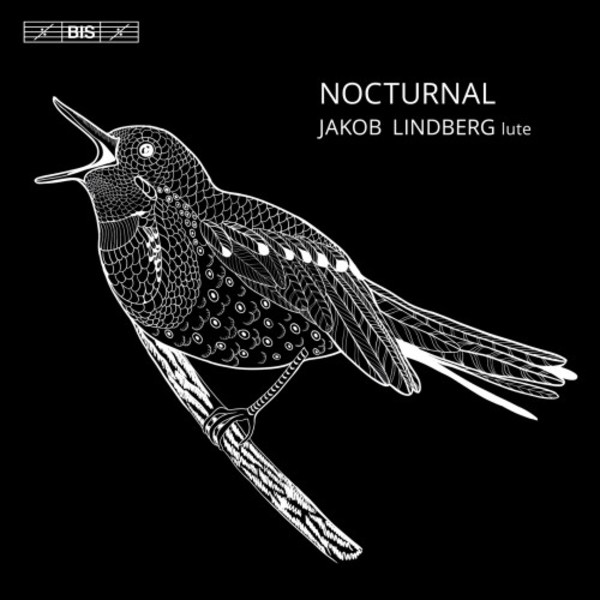 One of todays foremost exponents of his instrument, Jakob Lindberg arrived at the lute by way of the guitar and played both for several years. When he decided to devote himself exclusively to the historic lute repertoire it was with some regret that he gave up his first love. During his last year with the modern guitar Lindberg was working on Benjamin Brittens Nocturnal after John Dowland, one of the seminal guitar works of the 20th century. Much later, when he learned that Britten had originally had in mind to compose a piece for the lute, he started to experiment playing sections of Nocturnal on his Renaissance lute, and soon decided to make a transcription of the complete work.

Nocturnal is based on John Dowlands four-part song Come, Heavy Sleep, and inspired by this, Jakob Lindberg has placed it as the centrepiece of a recital with mostly Elizabethan pieces, many of which also evoke aspects of the night. Dowland himself is represented by a selection of six lute solos, while the opening section consists of five pieces by Dowlands older colleague Anthony Holborne. The closing track is by Holbornes contemporary, John Johnson, and bids the listener Good Night and Good Rest.

Music of the night is also music for the soul: while the rest of the world sleeps, the self in its solitude can gaze inwards or reflect outwards. And surely the musical instrument par excellence for solitary musings is the Renaissance lute, thanks not just to its gentle plucked tones but also to the way in which the player gently cradles the instrument, as if it were a sleeping loved one. The overriding theme of lutenist Jakob Lindbergs new album on BIS  taking its title from Benjamin Brittens solo guitar work which forms the centrepiece  is Nocturnal, and it provides plenty of soul music, some of it tinged with melancholy, but much with a more positive mood. Framing the discs focal point is a selection of glorious Elizabethan and Jacobean lute music by acknowledged masters of the genre. John Dowland and Anthony Holborne are well known to modern audiences, but there are also treasures by John Johnson, Edward Collard, Daniel Bacheler and John Danyel, as well as a transcription by Francis Cutting of William Byrds Lullaby.

The disc opens in relaxed mood with a group of pieces by Holborne, launching off with the splendid Honeysuckle and Muy Linda before focusing on the discs main theme in The Night Watch  you can imagine the solitary watchman humming this tune to himself. The Countess of Pembrokes Paradise introduces a more meditative tone, while the sprightly Fairy Round is appropriately enchanting. Hugh Astons Ground by Collard is a fine example of a ground, in which a repeated ground bass serves as the foundation for a succession of steadily more intricate variations. The idiomatically sonorous Pavan in F by Bacheler is eloquent tribute to his status as one of the great Elizabethan lutenists, while Danyels Mrs Anne Grene her Leaves be Green is a set of variations on the tune The Leaves be Green, written for the daughter of Sir William Grene.

In all these works Lindberg uses an 8-course Renaissance lute. He has a way of drawing the listener into this private world, partly by his refinement of tone and mastery of texture, but also through the subtle give-and-take of his rubato, imparting to the music an almost improvised feeling.

For three anonymous tunes from a seventeenth-century manuscript collection by John Skene, Lindberg uses a 7-course lute mandorée: a soprano lute in mandora tuning. It makes an ear-catchingly bright, muted-bell-like sound. The traditional Scottish tune Flowers of the Forest takes on an almost ornamental hue, while Lindberg is excellent at evoking elements of birdsong in The English Nightingale. For Cuttings intablature of Byrds Lullaby were back to the 8-course lute in a work that lulls the baby Jesus to sleep while also reflecting on the fate of those infants killed by King Herod.

Brittens Nocturnal after John Dowland was famously composed for guitarist Julian Bream, but the composer originally entertained the idea of writing it for the lute. Here Lindberg has returned to Brittens first draft (entitled Night Fancy) and transposed it down the better to suit the Renaissance lutes range. The result is a tour de force, Lindberg making light of Brittens formidable technical demands as the succession of seven variations gradually clears to reveal, at the close, Dowlands Come Heavy Sleep. Its extraordinary to hear the Renaissance instrument employed in this way so as to realise the composers initial vision, and it makes an intriguing, sonically varied and totally absorbing focal point for the album.

Appropriately, Lindberg follows the Britten with half-a-dozen pieces by Dowland himself, including the beguiling Orlando Sleepeth, the rarely heard Galliard to Lachrimae (an upbeat version of the composers most famous tune), the magical Mr Dowlands Midnight, and the intensely melancholic Farewell. These are deeply considered performances, reflecting the many years Lindberg has spent with this music. A less generous recital might have ended there, but Lindberg concludes with a trio of pieces by Dowlands older contemporary John Johnson, including the catchy Carmans Whistle and (to finish) the aptly titled Good Night and Good Rest, another fine example of an Elizabethan ground.

Throughout the disc Lindberg fully demonstrates why he is one of the most highly-regarded lutenists of today, with a total technical command, subtly deployed tones, and an unerring identification with the spirit of the music itself. And hes perfectly caught in intimate focus but warm sound by BISs excellent recording team, to make this disc and ideal companion for whiling away the evening, midnight or early morning hours.